Male nurses in Slovakia: Patients do not know how to address us

Meet some of Slovakia's male nurses. There are very few of them. 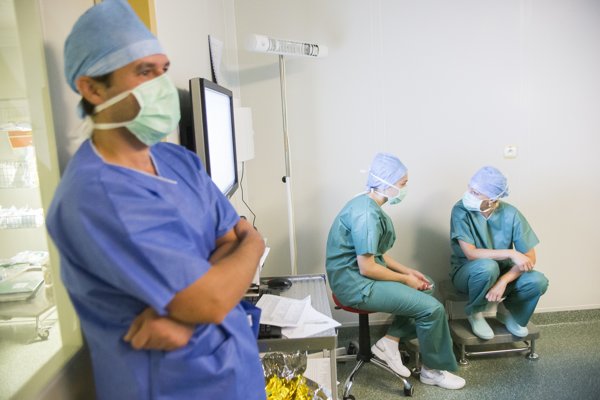 Miloš Čakloš was a primary-school pupil when he was badly injured, with torn tendons in his right hand. He underwent two surgeries in the hospital, two plastic surgeries in Bratislava and then home care. The three years that he spent in the hospital environment inspired him to choose the profession of a nurse.

“I observed the work of nurses in the hospital, they were with their patients 24 hours a day, working at 100 percent,” Čakloš told The Slovak Spectator.

His mom is also a nurse, so he says the job might be in his genes. He has never thought about a career as a doctor, he always wanted to be near patients. He has been working in National Oncologic Institute in Bratislava, his first job, for four years.

Čakloš is one of few men in Slovakia who has chosen this profession. In fact, looking for a male nurse is a little bit like looking for a needle in a haystack. From the total number of registered nurses and midwives, only 2.4 percent are men, according to data of Slovak Chamber of Nurses and Midwifes.

Registered nurses and midwives in Slovakia

“Even though there are definitely more male nurses in Slovakia than five or 10 years ago, the opinion still persists that it is a women's profession,” Milan Laurinc, office director of Slovak Chamber of Nurses and Midwifes, told The Slovak Spectator.

The Slovak language does not help overcome the stereotype. In Slovak, a nurse is “zdravotná sestra” or only “sestra”, which literally translates as “healthcare sister” or simply “sister”, reminiscent of the old days when the profession was mostly performed by nuns. There is no linguistic equivalent for men working as a nurse.

“Once I picked up the phone at work and introduced myself as a ‘sister’. A nurse from surgery was calling and she started to laugh very hard,” Čakloš recalled.