From Slovakia to the streets of Kenya

The feature I didn't write, though it deserved to be. 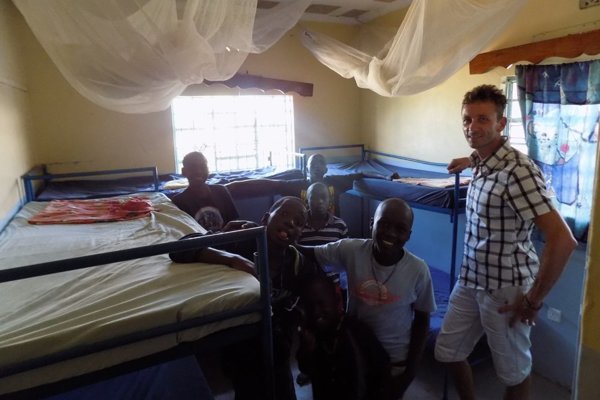 I was not feeling very well when Tomáš Rusnák picked me up from the Kenyan city of Eldoret. After sleeping for three hours, at six in the morning I had taken a flight from Nairobi to a school and hospital project.

I already knew Tomáš. We met seven years ago in South Sudan, which was not yet independent then. There, I was learning timidly how to write features (though I pretended to be more self-confident when putting them together), and he was learning about development aid.

We are peers, being in our early thirties. I returned home from South Sudan, but he remained in Africa for seven years. And he is not going to return to Slovakia any time soon.

There was a three-hour journey lying ahead of us before we reached Kisumu, where Tomáš runs a shelter for boys on the street. I was worn-out, and I let him speak. Indeed, he had a lot to talk about. The powerful stories of the boys in Kisumu may not change the world, but Tomáš helps change the boys' lives for the better, thanks to the St Philip Neri Orphanage, run by St Elisabeth University of Health and Social Sciences in Bratislava.

In his stories, everybody is a Sandokan. Restless children, who lived on the street for several years and are now getting used to a daily routine. Get up at seven, clean up, have breakfast, school, free time, and a film in the evening when they surround a laptop of Tomáš'. If they misbehave, the film is left out. Putting them to bed begins at ten.

Breakfast, lunch, and supper. Ugali, a porridge made by mixing water, soil, and corn flour, is served every day. Only the side dish varies. Sometimes it is beans, another time vegetables. Meat is served only on Sundays. "To my surprise, they like it," says Tomáš, who studied cooking, with a smile on his face.

One of the boys was sitting in the backseat, on a special trip to Eldoret. Each time Tomáš drives somewhere, he takes one boy with him to make the boy's day brighter.

Tomáš took me to lunch in Kisumu, then to their centre, and afterwards to a chaotic border with Uganda, where I had to get out of the car and cross the border on foot. For those several hours, I listened to stories about the boys. Despite each of them having a family, they find themselves on the street.