The mining company responds with a criminal complaint. 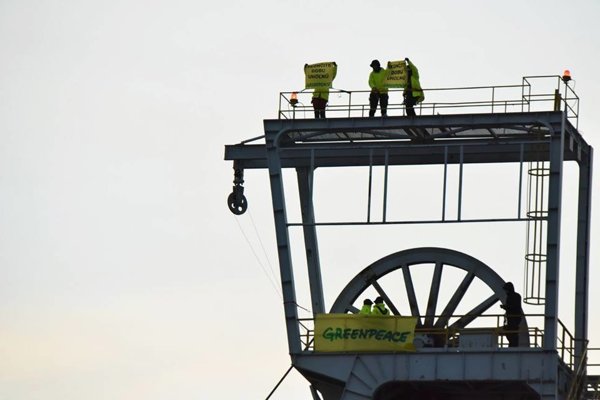 “End the Coal Age!” reads a 15-metre-long banner placed on a mining tower situated at the complex of the Hornonitrianske Bane Prievidza mining company in Nováky (Trenčín Region) by activists from Greenpeace Slovensko.

“Ending the Coal Age means leave the coal in the earth and stopping its burning,” wrote Júlia Sokolovičová, energy expert in Greenpeace CEE, in a Facebook post. “The time has come for the government to stop discussing the budget of one company and focus on the real end of coal instead, protecting people’s health and the environment. Slovakia can do more.”

All 12 activists were later detained, and the organisation is currently waiting for the further steps of the police. 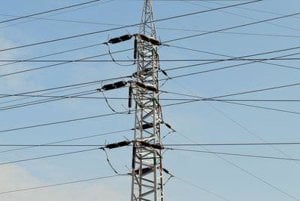 Altogether 12 activists from Greenpeace Slovensko climbed the tower at 6:00, with the aim of staying in the complex until 16:00. Gradually, the vehicles of police, rescuers, mining rescue services and firefighters arrived to the site, the TASR newswire reported.

Meanwhile, Economy Minister Peter Žiga (Smer) said that the coal mining will be subsidised by the state only until 2023. The original support scheme was to end in 2030.

“We think that this is also the date coal mining can be completely subdued in Slovakia,” Sokolovičová said, as quoted by TASR. “This is because electricity and heat generated from coal has the smallest share in the energy mix in Slovakia of all other central European countries.”

The Hornonitrianske Bane Prievidza company already said that the price of electricity generated from renewable energy sources is supposed to be higher than that generated from coal.

The Office of the Deputy Prime Minister for Investments and Informatisation already submitted a document concerning the transformation of mines, written probably in cooperation with Hornonitrianske Bane Prievidza, into an interdepartmental review, Sokolovičová said.

“It contains a schedule for closing the mines, but suggesting that all coal should be extracted quicker,” she specified, as quoted by TASR, adding that it does not concern all brown coal mines in Slovakia, only those situated in the Upper Nitra region. “Slovakia should save the highest sum if it stopped mining and burning coal and replaced it with renewable sources. The quicker it does so the cheaper it will be.”

Deputy PM for Investments and Informatisation Richard Raši (Smer) later responded that several subjects, including Hornonitrianske Bane Prievidza, the municipality, businesses and third sector, had to contribute to the material concerning the transformation of the mines in the Upper Nitra region.

However, he stressed that there was no mention about speeding up or slowing down the coal extraction, as reported by TASR.

The operation had to be suspended

The action of Greenpeace Slovensko activists resulted in an immediate halt to the operation of the mining machine and the entire mine.

“As a result, the safety and lives of 342 miners, who are currently underground, and the safety of mining operation have been put in danger,” said Adriana Siváková, spokesperson of Hornonitrianske Bane Prievidza, as quoted by TASR.

The halt in operation also threatens the workplaces in the mine and has a negative impact on climate conditions. At the same time, the changes to the pressure worsen the stability of workplaces and there is a higher risk of fire. Moreover, it can result in significant economic damages to the company, Siváková stressed.

By climbing the mining tower, the activists did not endanger only themselves, but also the miners who have nothing to do with them, she added for TASR.