Poll: Smer would win, but opposition could form government

The far-right ĽSNS would have gained two more seats, as well as 9 Christian Democrats. 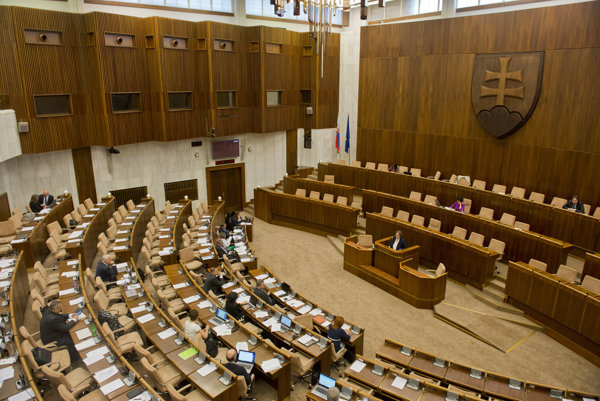 If the general election had been held in late November, the clear winner would have been the ruling Smer party, supported by 23.4 percent of voters. This would bring it 38 parliamentary seats, as stems from a poll carried out by the AKO agency on 1,000 respondents.

Despite its victory, Smer would not be able to form a government with its current partners.

As stems from the poll, Freedom and Solidarity (SaS) would come second with 15.9 percent (26 seats), followed by Sme Rodina (We Are Family) with 10 percent (16 seats).

How do the other parties stand?

The Slovak National Party (SNS) came next with 9.3 percent and 15 seats. The same number of seats would have been occupied by the far-right Kotleba – People’s Party Our Slovakia (ĽSNS), which would have won 9.2 percent of the vote and 15 seats.

The other parties that would have made it to the parliament include the Ordinary People and Independent Personalities (OĽaNO) with 7.7 percent and 12 seats, followed by the non-parliamentary Christian Democratic Movement (KDH) with 6.7 percent and 11 seats, Most-Híd with 5.7 percent and nine seats, and Progresívne Slovensko (Progressive Slovakia) with 5.3 percent and eight seats.

The rest of the parties reported a drop in their support, the poll suggests.

The results also show that the current ruling coalition would fail to form a government again. If Smer, SNS and Most-Híd joined forces again, they would only have 62 MPs in the 150-member parliament.

However, if the second strongest party in the poll, SaS, decided to form a government with Sme Rodina, OĽaNO and Progressive Slovakia, they would be backed by 73 MPs. They would miss only three votes in order to have a majority in the parliament.