Nothing changes for Smer following the recent congress

The party still has not revealed the name of its presidential candidate, pointing to potential attacks by the opposition. 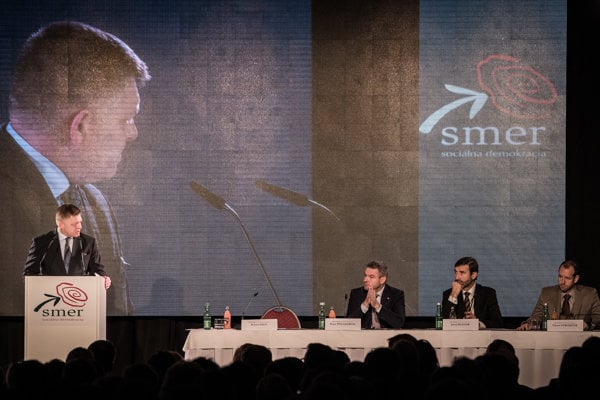 The reintroduction of the right to reply for public officials and the halt to the anonymization of internet discussions in the media are among the priorities adopted by the members of the ruling Smer party at its annual congress held on December 8 in Trenčín.

The party also plans to introduce various social measures, such as prolonging maternal benefits to one year, increasing parental benefits and cancelling fees for changing personal documents after marriage. The party reiterated their plans to reduce VAT on basic needs for newborns and the contribution for buying school equipment for first-graders.

In his speech, party chair Robert Fico attacked the media, accusing them of deceiving the public, as well as the president. At the same time, he refused to reveal the name of his party's presidential candidate even though they had originally promised to do so in the autumn, the Sme daily reported.

No presidential candidate yet

Fico said at the beginning of his speech that they would not reveal the name of the presidential candidate at the congress.

“We’ll nominate and support a strong and real candidate, but tactics tell us to be patient because the moment we reveal the name, he/she would become a target of the opposition’s lynching,” Fico said, as quoted by Sme.

Foreign Affairs Minister Miroslav Lajčák, who has been a favourite in the polls and was considered to be the party’s nominee, has confirmed to Sme that he would not run.

“We believe that we will choose a better president than we have now; we need a president with his own opinions,” Fico added, as quoted by Sme.

Kiska has openly criticised and pointed to several scandals concerning Smer. Ever since, he has been a frequent target of both Fico and ex-interior minister Robert Kaliňák, Sme wrote.

Attacks on the media

Fico continued by saying that Smer has been facing media terror and lynching.

“This has to end,” he said, as quoted by Sme, adding that they will respond to every media attack with legal means.

In this respect, Fico wants to reintroduce the right to reply for public officials. In the past, Smer had approved the legal change, but it was dropped from the law during the rule of Iveta Radičová's government (2010-2012).

His party also wants to stop the anonymization of internet discussions beneath articles. According to their proposal, the publisher will be responsible for the discussion’s content, Sme wrote.

When describing how the media deceived the public, Fico pointed to the reports about the abduction of Vietnamese citizen Trinh Xuan Thanh and the murder of investigative reporter Ján Kuciak and his fiancée Martina Kušnírová.

As for the latter, he referred to the fact that the media informed about the connections of former Government Office employees Viliam Jasaň and Mária Trošková to the Italian mafia. Fico interpreted this at the congress by saying the media wrote that “the government murdered the journalist via the Italian mafia”.

No conflicts with Pellegrini

Fico also dispelled the rumours that his relationship with Prime Minister Peter Pellegrini would be tense. Pellegrini was sitting among the other vice-chairs the whole time and Fico sat next to him after his speech.

Pellegrini then told other Smer members that the success of the party depends on how they can communicate the advantages brought by the government to the people. He also mentioned the need to avoid scandal, Sme wrote.