Smer has its candidate now, and Andrej Danko will not run for president. 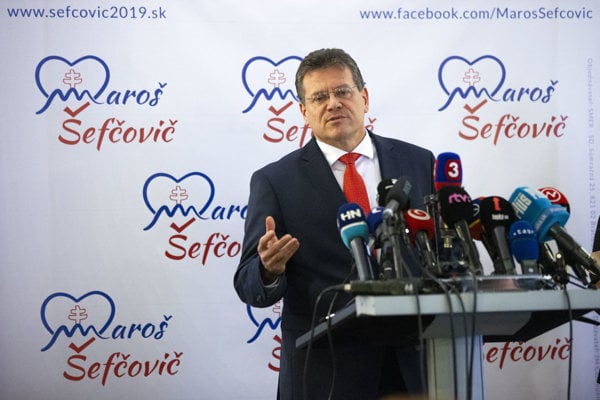 Vice-President of the European Commission for Energy Union, Maroš Šefčovič, leaped to the top of the presidential polls soon after he announced he was running for president.

Šefčovič, who is a career diplomat, announced his candidacy on January 18. He is running with the support of the ruling Smer, but he is not stressing it in his presidential bid.

The first poll of the Focus polling agency for the TV Markíza private broadcaster, which included Šefčovič as the confirmed candidate, placed him at the head of the vote. It left out the name of Foreign Minister Miroslav Lajčák, whom Smer originally wanted as their candidate. Robert Mistrík, who is running with the support of the opposition SaS and Spolu, is also at the head.

Šefčovič and Mistrík returned the same result of 16.5 percent. Focus conducted the research between January 16 and 23 on a sample of 1,013 respondents, meaning the data gathering started two days before Šefčovič announced his candidacy.

The name of the Smer candidate in presidential election was long awaited. The media firstly speculated with Miroslav Lajčák, Foreign Affairs Minister, who was leading the presidential poll even without announcing candidacy. Experts say that he was able to also attract the opposition electorate.

“The potential of Šefčovič is lower than Lajčák’s among the democratic opposition ranks,” Martin Slosiarik, director of the Focus agency, told The Slovak Spectator. Slosiarik said this even though Šefčovič has potential to grow, especially because part of Smer voters have not decided yet for whom they will vote.

Pavol Baboš, political analyst from the Comenius University school of political science, claims that Šefčovič's ability to attract opposition voters will depend on the content and the form of his campaign.

“Many voters of the coalition are not pro-EU, so I assume that the core of his campaign will be contact with voters in the field, where he can avoid opponents who will confront him on his EU career,” he told The Slovak Spectator.