Brexit has bolstered public support for the EU

Ireland, the smaller country, now negotiates from a position of strength — because of EU membership. 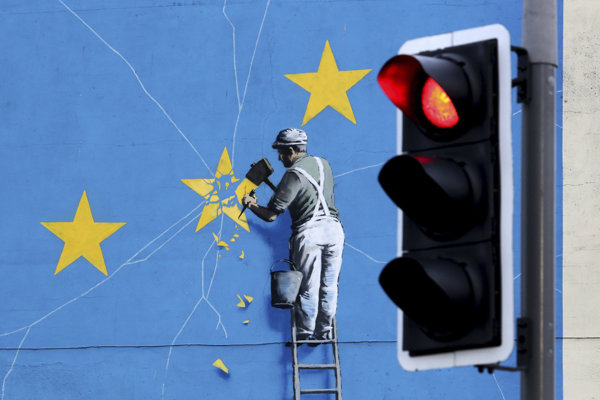 In a time when so much about the EU feels troubled, British backwardness is prompting reminders of what works. (Source: AP/TASR)
Font size:A-|A+23

One huge irony of Brexit is that it has bolstered public support for the European Union. One poll last year found European support for the EU at a 35-year high. Populists that once hinted of leaving the EU now talk about changing the EU from within instead. Meanwhile, the stalemate that has emerged after the UK parliament rejected Theresa May’s Brexit deal serves as a perfect demonstration of why EU membership is important.

The biggest sticking point in May’s proposed agreement with the EU was the so-called “Irish backstop”. Northern Ireland (part of the UK, and thus on its way out of the EU) is geographically isolated from the rest of the UK, but shares an island with the Republic of Ireland (an EU and eurozone member). Northern Ireland is dependent on goods from Ireland, while Ireland’s economy counts on selling goods to Northern Ireland. When and if the UK leaves EU free trade area, these strong ties, and many livelihoods are thus threatened.

But solving this problem is complicated. How do you pull your country out of a trade area while also maintaining free trade? A solution to this riddle — if there is one — may take a while. So May and the EU negotiated that Northern Ireland would remain in a customs union with the rest of the EU until a permanent solution is found.

However, hardcore Brexiteers opposed May’s proposal. They fear, justifiably, that solving this problem is so tricky — perhaps impossible — that Northern Ireland could end up stuck operating under EU trade rules forever -- effectively creating two different trade regimes within the UK itself. Instead, Brexiteers insist on a time limit for this backstop, meaning Northern Ireland would eventually leave the customs union at a certain date no matter agreement or not, potentially seriously harming the Irish economy.

In the past, Ireland (which has a population that equates to just 7 percent of the UK’s) would be at a huge disadvantage negotiating a solution to this problem. In a repeat of a pattern that saw Ireland colonised by the British for hundreds of years, the Irish would have no choice but to accept whatever London dictated as the new rules on the Ireland-Northern Ireland border.

But not today. After the UK parliament rejected May’s plan, she sought to renegotiate the backstop portion of the agreement. The EU said no. Ireland, the smaller country in this particular dispute now negotiates from a position of strength — because of EU membership.

A similar dynamic allows Slovak businesses to negotiate deals with Chinese companies on equal footing. Backed by trade rules negotiated by the EU as a whole, they are not abused or disadvantaged simply because they come from a smaller country. Even the EU’s biggest members — France, Germany, Italy and Spain — use this combined strength of the EU to compete with big players on the world stage.

In a time when so much about the EU feels troubled, British backwardness is prompting reminders of what works.