The court now has only four active judges and has published new work schedule.

The Constitutional Court published an amendment to its work schedule shortly before noon on February 16 suggesting how it will operate now that it is left with only four out of its normal complement of 13 judges.

The work schedule is a key document. It sets the number of senates, their composition and which judge will prepare the decision proposals.

From February 17, the Constitutional Court will have only one functional senate, according to the amendment. As a result, the it will work to only a very limited regime since the senate will not be able to deal with all the cases the court will receive, the Sme daily reported.

Work to a limited regime

The senate will be composed of all four remaining judges, but will work only with three of them, since that is what the law requires. In the first variant, it will be composed of Jana Baricová, Miroslav Duriš and Mojmír Mamojka and in the second by Jana Baricová, Jana Laššáková and Mojmír Mamojka. In the latter combination, two former Smer MPs will have the majority, Sme pointed out. 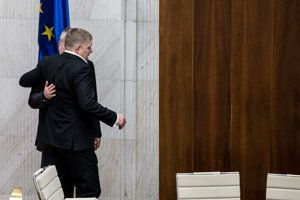 If anybody objects to the members of the senate, pointing to the potential conflict of interests, the complaint will not be taken into consideration, the document reads. Under normal circumstances, the objection would be judged by another senate. However, since there is only one at the moment, there is nobody to make that decision.

The amendment also reads that the senate will not deal with all the complaints and motions the court receives after February 17. They will start by dealing with only three of 10 motions, with the rest being left for new Constitutional Court judges. However, the document suggests that court-appointed advisors could work on them, which may speed up the decision-making process after the new judges are appointed, Sme wrote.

This rule will not be applied to urgent cases though.

Moreover, the three-member senate will only be able to decide on complaints submitted by people or companies against the actions of the general courts, the police and other offices. The court will also decide on complaints concerning candidates for public functions, aimed against parliament or the president.

The Constitutional Court will not decide on any important political and legal decisions made in the plenum, such as decisions on the constitutionality of laws. The reason is that there will be no plenum after February 17, Sme wrote.

Moreover, the plenum decides on complaints over election results. If no plenum is created before March 16, the court will not be able to decide on any complaints over the outcome of the presidential elections.

The temporary rules will be applied until new Constitutional Court judges are appointed and approve their change, Sme wrote.

Meanwhile, PM Peter Pellegrini has criticised his own Smer party for its behaviour during the February 14 vote for the candidates for Constitutional Court judge.

He will not initiate any special cabinet session, nor will he ask the parliament to debate the law to prolong the tenure of the current Constitutional Court judges, Pellegrini said on February 15. The coalition should have elected the number of candidates for the court to be functional, as reported by the TASR newswire.

He hopes a new vote will be announced soon and those responsible will make a deal and secure the functionality of the Constitutional Court.

Juraj Blanár of Smer said during the political talk show O 5 Minút 12 (Five to Twelve) broadcast by the public-service RTVS on February 17, that the coalition parties will seek agreement on the new Constitutional Court judges.