Confusion, insecurities, prejudice. Ormandík’s wall is on display in Danubiana

Artist Marek Ormandík celebrates his 50th birthday with an exhibition. His work also reflects on the refugee crisis. 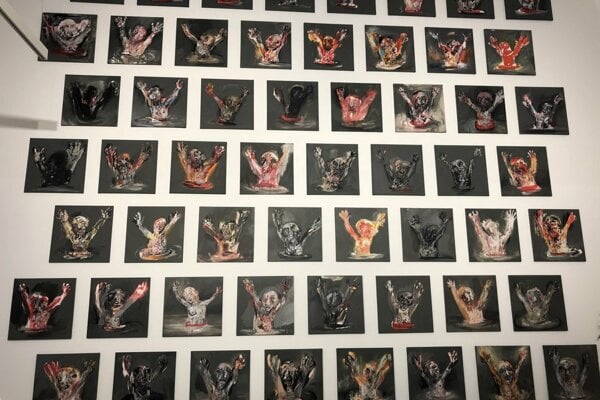 Ugly characters with distorted faces stretching their arms from the water to the people. Small pictures, covering the whole wall of the gallery, are placed like bricks, creating a wall.

The exhibition is currently on display in the Danubiana Meulensteen Art Museum in Čunovo, close to Bratislava. It was prepared to celebrate the 50th birthday of painter Marek Ormandík and is entitled “The Wall of Mareks”, the Sme daily reported.

“It’s a big exhibition, a big jubilee, but we wanted it not to be an inspection of a life's work,” said Mišo Ormoš, the exhibition’s curator and Ormandík’s son, as quoted by Sme. “We wanted to make it fresh. The majority of the works have been created in the past three years, and it’s something Marek has on his mind.”

What can be seen at the exhibition?

The exhibition contains 100 pictures, about 50 drawings and some sculptures. It includes paintings from the Night Navigation cycle, with which Ormandík responded to the migration crisis.

Marek Ormandík: The Wall of Mareks

“The fact that the refugee crisis overlapped with topics I reflect in my paintings is an accident,” Ormandík said, as quoted by Sme.

He is not a politically engaged painter. He was interested in people’s responses rather than in the crisis.

At the same time, Ormandík’s works are full of biblical and mythological motives. He also tries to capture the sorrows of life, Sme wrote.

The Wall of Mareks should be considered a play on words, reflecting Ormandík’s work.