Four Slovaks killed in the plane crash in Ethiopia

Wife, son and daughter of MP Anton Hrnko are among the victims. The fourth Slovak victim was a charity worker. 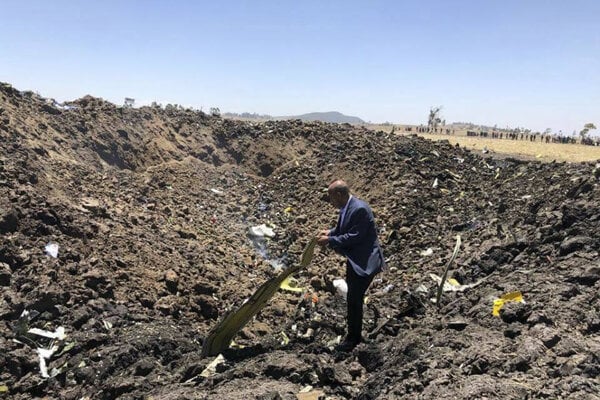 The CEO of Ethiopian Airlines, Tewolde Gebremariam, looks at the wreckage of the plane that crashed shortly after takeoff from Addis Ababa, Ethiopia, on March 10, 2019. (Source: AP/TASR)
Font size:A-|A+379

Four Slovaks were among 157 victims on board of the ET302 flight from the Ethiopian capital to Nairobi in Kenya, which crashed on March 10. The information was published by Louise Dewast, BBC reporter covering West and Central Africa, on Twitter. The information was meanwhile confirmed also by Slovakia's Foreign Affairs Ministry.

The wife, the son and the daughter of SNS MP Anton Hrnko are among the victims. The Bubo travel agency confirmed one of their delegates was onboard the plane. Martin Hrnko, the son, worked as their delegate, Sme daily wrote.

Hrnko announced on his Facebook profile in the afternoon that his wife Blanka, son Martin, and daughter Michala were killed in the air accident in Addis Abeba.

The fourth Slovak victim is charity worker Danica Olexová from Dobrá Novina (Good News) organisation. The head of the organisation, Marián Čaučík, confirmed her name for the Sme daily. She was responsible for projects in Kenya.

Prime Minister Peter Pellegrini expressed his condolences to the families of the victims. He wrote on Facebook that the government is ready to send the government's special plane to transport the bodies of the killed Slovaks back to their homeland if necessary.

An Ethiopian Airlines Boeing 737 passenger crashed soon after take-off. None of the 149 passengers and eight crew members believed to be on board survived, the airline said, as reported by BBC.

It is not yet clear what caused the accident. However, the pilot had reported difficulties and had asked to return to Addis Ababa, the airline informed.