Which cities in Slovakia have the worst air quality?

28 locations in Slovakia listed in the ranking. Many affected by heavy industries.

U.S. Steel Košice is the largest steel producer in central Europe, situated close to the village of Veľká Ida, near Košice. The village was also revealed as the most polluted municipality in Slovakia in 2018, the PM 2.5 data by IQAir AirVisual shows.

PM 2.5 is considered an air pollutant. These are tiny particles in the air that reduce visibility and cause the air to look murky when its levels are high.

Slovakia was also ranked as the 40th most polluted country in the world, with a moderate score of 18.50 points. Yet the country has the 10th worst air quality in Europe, according to the report.

The report monitored data from more than 3,000 cities across the globe, collected from public monitoring sources. In the case of Slovakia, it was provided by the Slovak Hydrometeorological Institute (SHMÚ). 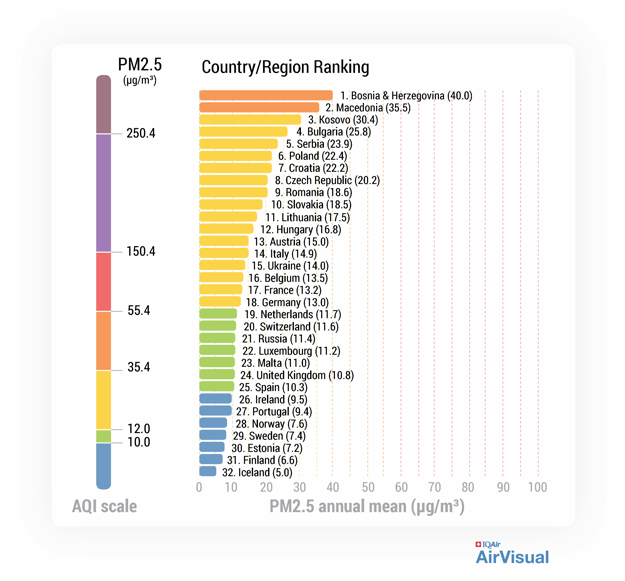 The list of European countries with the worst air quality in 2018. (Source: )

All 28 Slovak towns listed as the most polluted cities in the world scored moderate levels of worsened air quality. Veľká Ida, which ranked 43th in Europe and 536th worldwide, scored 24.3 points.

Žilina, where the KIA Motors Slovakia car plant is situated, was ranked as the municipality with the third worst air quality in Slovakia, scoring 21.8 points. It was followed by Ružomberok (Žilina Region) with 20.7 points. The air quality in the town is affected by the Mondi SCP paper mill. Trnava, where the PSA Groupe car plant is situated, was ranked the fifth most polluted municipality in Slovakia, with a score of 20.5 points.

Top 10 most polluted towns in Slovakia in 2018. (Source: IQAir AirQuality)

Which are the most polluted countries?

In India, Gurugram with 135.8 points and Ghaziabad with 135.2 points are the most polluted cities in the world, followed by Faisalabad in Pakistan.

In fact, the top 50 places with the worst air quality can be found in only four countries, namely China, India, Pakistan and Bangladesh. Most of them are situated in India, though. All are seen as unhealthy places to live in.

In addition, Bangladesh is the most polluted country worldwide, IQAir AirVisual reported.

Thank you for singing up. Shortly an email will be sent to the address you provided to verify your e-mail.
Error! Please try to register again later, your e-mail was not registered.
Your email is not in a correct format.
Please confirm you are not a robot.
Share on Facebook (139)Comments disabled