Nobel Prize winning scientist will give a public lecture in Bratislava

Klaus von Klitzing will talk in Slovakia about his Nobel Prize and the new kilogram. Register now for the free lecture.

The lecture will take place on Monday, April 29, 2019 between 16:00 –17:30 at the Magna Assembly Hall of Faculty of Informatics and Information Technologies STU on Ilkovičova 2 in Bratislava

Subject of lecture in Bratislava:
From my Nobel Prize to a new Kilogram

The International System of Units (SI units) forms the basis for all measurements. Long-term comparisons of the kilogram prototype with other mass standards indicate that the kilogram prototype is not stable with time so scientists decided to define the SI units in terms of invariants of nature. The new definitions will be based on fixed numerical values of the Planck constant (h), the elementary charge (e), the Boltzmann constant (k), and the Avogadro constant (NA), respectively. This system will be implemented worldwide on 20.5.2019.

The quantized Hall resistance (Nobel Prize 1985) plays a crucial role for the realization of this new SI system since this quantum resistance can be used not only for high precision measurements of electrical standards, but also for a new realization of a kilogram by comparing electrical and mechanical forces with the Watt balance. The talk summarizes the application of the quantum Hall effect in metrology with the focus on the replacement of the kilogram with a fixed value for the Planck constant. 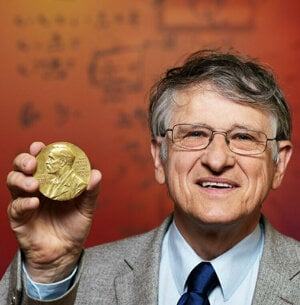 His Nobel Prize discovery led to the introduction of the von Klitzing constant, which revolutionized our international system of units. Von Klitzing's research currently focuses on the properties of low-dimensional electronic systems, typically at low temperatures and in high magnetic fields.