This piece is the runner-up for the European Press Prize 2019. 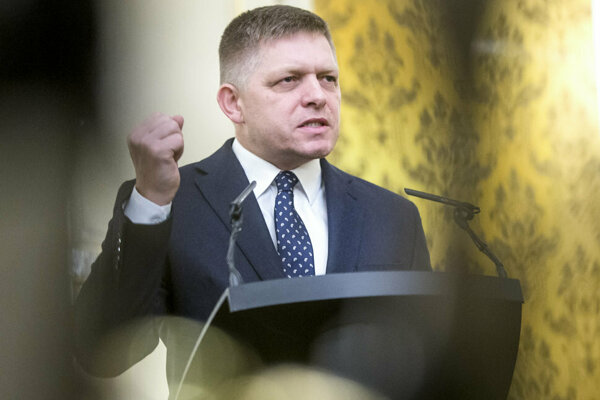 This piece is the runner-up for the European Press Prize 2019.

There are no positive attributes that go with murder. There should be no attributes at all. It is just brutal in itself. It robs everyone of everything. The victim’s family of their faith in life. The murderer of humanity.

The murder of Ján Kuciak and Martina Kušnírová pierced us like the bullets that extinguished their lives. We are still bleeding. Those shots did not hit us just once. They keep hitting us every time we realise that it happened here and now.

It is not a terrifying testimony from the past, from the times when they used to hang, burn, or drown the people we deemed unworthy, as if they were just unwanted kittens the family cannot sustain.

The year of the murder

2018 will be remembered as the year of the murder.

Not merely in our often too short collective memory, but also in the modern history of our country. Many a reader might now say, leave me alone with that murder now. Leave us alone and let the victims rest in peace. There is nothing you haven’t said about it yet.

But if we do forget this trauma and push it aside before we understand what really happened, what it did to us and our society, and what the implications for us are, what we should change in order to make sure this never happens again, we will not move anywhere. Our agony will linger, making us feel like we are helpless when confronted with evil and abuse of power.

Moreover, MP Robert Fico is talking now, in the year of the murder of a journalist, about the tyranny of the media and media lynching. That is the lesson he is spreading.

From the first days following the murder he tried to separate it from the atmosphere in society. He often talks about the murder of two young people, instead of the murder of a journalist, to stress that there is almost no difference between this and other violent tragedies. We need to investigate it and life moves on. He makes the tragedy a technocratic affair, and mythologises power.

We feel sorry for a grandmother

We haven’t been ready to explain why we are shouting so loud after the murder of a journalist, if we do not ring the alarm every time someone is shot. We were not ready to compare monstrous murders. But some asked us why we don’t shout as loud and for so many months when a grandmother is killed for twenty euros or a child is hit by a car at a pedestrian crossing?

Not because the murder of a grandmother doesn’t concern us. That murder does concern us. We shout out loud that it is inhuman and it shows how decadent, how ill our society is.

Ján Kuciak was murdered because of his work and journalists represent the public and the readers. Journalists are the ones people turn to when they haven’t received help from the police and justice from the courts. Media are often the last among those that can control people who hold power on behalf of the public. Give a voice to those who have none.

When they kill a journalist, they don’t want to silence just that one person, they want to silence them all, because a journalist is the eyes and the mouth of the public. If anyone comes up with comparisons like that, they either do not understand the role of the media, or they abuse the image to downplay the gravity of the situation.

We are no mercenaries in a political war, an image that Robert Fico likes to paint of us. We make mistakes, but not as grave as he has been constantly accusing us of having done in recent years.

There is a community of independent journalists in Slovakia, across several media, despite ownership, financial reality, despite declining standards among part of the readers, despite the fact that populists and fascists merrily feed their herd of conspiracy websites. Despite the attacks of politicians; despite the fact that nowadays anyone pretends to be a journalist: a secret service agent, a spy of the oligarchs, a militant provocateur, a person who needs help, a spokesperson, a PR manager.

But the people who do their job verifying information, believe in truth, seek it, keep asking questions and work for their readers, understand their immense responsibility and understand that there is no alternative to democracy, and they not suffer from selective blindness, they all deserve support.

Because we can see what is happening in countries where the government, with the help of its befriended oligarchs, goes for the throats of journalists, and gradually suffocates independent and critical media. In their alibi manner, they allow a small project that do not reach readers outside big cities to survive, so that they can showcase them when confronted with criticism from Europe: see, we do have media plurality.

Fico is attempting a rehabilitation of himself and the people from the Government’s Office who had ties with the Italian mafia and were forced to leave their posts. He asked who will apologise to those people now.

We therefore need to repeat the facts: the prime minister’s assistant, former state employee Mária Trošková, did business in the past with Antonino Vadala, whom Slovakia extradited for criminal prosecution to Italy for drug trafficking. The secretary of the government’s Security Council Viliam Jasaň also has ties with the Vadalas. The Prodest security company owned by his son Slavomír Jasaň was co-owned by Pietro Catroppa, the cousin of Antonino Vadala.

Trošková did not even need security clearance to stay close to the prime minister. Jasaň did have one, but when the scandal broke out, he prevented the National Security Bureau from investigating if he was authorized to obtain it.

His fall wasn’t caused by George Soros, Andrej Kiska, or entrepreneurs who allegedly bought protesters. Fico had to leave because he abused his power. And such a deed does not get rehabilitation.

In the year of the murder, instead of dealing with measures to secure the protection of journalists facing attacks or threats, Robert Fico is dragging the government into its fight against critical media.

At the same time, he is struggling for the interpretation of his departure from the Government’s Office, and his return to full power. Fico does not care about anything else. It is not a new struggle, obviously. But the struggle for the definition of journalism is becoming more peaked, when populists are dividing journalists into “opposition” and “the right ones”, enemies and friends (meaning tamed by them), those who do not close their eyes and mouth when they see corruption or other failures. He calls them enemies of the state.

Fico and Danko brand journalists as an aggressive brigade that lynches and ruins honest politicians, one that does not apologise and that disregards the consequences. He wants spokespeople, transcribers of his slogans, photographers of his presence in the world of power. Fico wants to define whom to criticise, and when, and how much.

Robert Fico and Andrej Danko also dragged the Press Code into their struggle to redefine journalism. The law should have been reopened for legitimate reasons: for example to bring it up to date with demands of the digital media. Fico has already announced that he wanted to insert the right of reply for politicians in the Press Code again.

If a medium works ethically and checks facts, it naturally gives a say to politicians when it writes about their activities. If it publishes a mistake, it should be in the interest of the media to put it right.

But the law should not define the place and the scope of politicians’ replies the media should publish. Otherwise, we risk ending up with inappropriately long statements on the front pages of dailies or websites. Given the current political constellation and the rhetoric that those demanding these changes have been using in the long run, journalists express justified concerns that they would abuse this “right” to overwhelm the media.

In an atmosphere when Danko and Fico categorise the media as the “obedient” and the “defiant” ones and refuse to answer their questions, demanding the right to reply is hypocritical, to say the least.

In such an atmosphere, just the mere mention of some “chamber” that would issue licenses to journalists, smells of Orban’s media doctrine. Moreover, the Council of Europe has already defined journalism in the past. Let’s hope the government does not aspire to insert its own definitions in the law.

Back to the essence of journalism

Unfortunately, we do have media on the market today that demoralised their reporters. Their managers allowed them to do “nice things” or real journalism in exchange for compromises: an occasional report-on-demand, a welcoming attitude to one source and increased aggressiveness to another.

If a journalist cannot be proud of the brand they write for, they start coming up with excuses as to why they continue.

A medium loses a good journalist at the moment when it strips him or her of self-respect. The journalist will no longer be able to reflect the real picture of society for the reader. Only deformations will remain, stuck in clichés, the statements of politicians and preferred sources. The journalist will become just a part of a machinery that turns villains into celebrities, fraudsters into businessmen, PR into news, and propaganda into truth.

The murder of Ján Kuciak and Martina Kušnírová reminded many that we are not in the game for the most effective PR campaign or rankings, although we do understand that the limits of our freedom are imposed by our ability to earn money for our own functioning.

But they do not interfere with our internal freedom – for that, only moral limits should apply.