Coalition agrees on two more candidates for the Constitutional Court

Both the president and non-governmental think tank are critical of the vote. 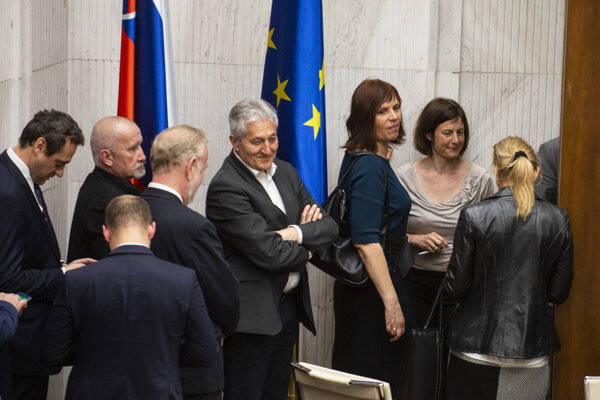 The Slovak parliament has elected two more candidates for the vacant posts in the Constitutional Court on April 4. Pavol Malich received 83 votes and Miloš Maďar 77 votes.

They will join the other six candidates that MPs elected in the first round, held a day before. All eight candidates were supported by the ruling coalition, which had already agreed on their selection before the April 3 vote, the Sme daily reported.

Candidates for the Constitutional Court judges

President Andrej Kiska is now expected to appoint four of these candidates to the judicial posts in the Constitutional Court.

He has already said that he will do everything he can to make the Constitutional Court function again.

However, he has criticised parliament for not being able to elect all 18 candidates, so that he could appoint the nine missing judges, Sme wrote.

Also the legal think tank Via Iuris is of the opinion that it was possible to pick 18 out of the 29 candidates running in the second vote, and then choose nine good Constitutional Court judges.

“If the president appoints four new judges, the Constitutional Court will still have only eight judges in total,” it wrote in a statement, as quoted by the SITA newswire.

As a result, the court would only be able to decide on the unconstitutionality of a law or the invalidity of elections if seven of its eight judges vote the same. Otherwise, it would be hard to achieve the necessary majority.

The fact that Malich and Maďar were not elected in the first round was a coincidental mistake, stated Robert Fico.

However, Sme reported that some MPs from Smer had a problem voting for Malich and they did not elect him on purpose. Chair of the opposition Ordinary People and Independent Personalities (OĽaNO) movement Igor Matovič also voted for Malich in the first round.

Most-Híd chair Béla Bugár was angry and claimed that if the failed election was intentional, the next election should have been public. Fico responded that the agreement with Most-Híd was met 100 percent, so all the candidates proposed by the party passed.

Speaker of Parliament Andrej Danko from the Slovak National Party (SNS) said before the vote that if the remaining two candidates were not elected, it would not be a tragedy, Sme wrote.

MPs are expected to elect the remaining 10 candidates during the next parliamentary session, starting in May.