Juncker: I am still a great fan of enlargement 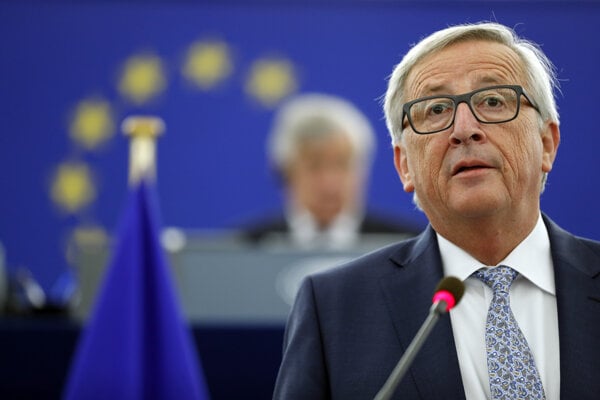 This article was first published in the Sme daily on April 29.

Jean-Claude Juncker is stepping down as the European Commission’s president this autumn after five years. He met with four media from the Visegrad Group countries before the European Parliament elections: the Sme daily (from Slovakia), the Hospodářské Noviny daily (the Czech Republic), the HGV weekly (Hungary), and the Rzeczpospolita daily (Poland).

In this interview, Juncker discusses:
-Whether the big enlargement of the EU 15 years ago was a success
-How the murder of a journalist changed Slovakia's image abroad
-Whether he would still opt for the quota if he was to decide now
-If the V4 countries will be able to join the EU now, considering the problems they are dealing with
-If it's realistic to expect the UK to remain in the EU in the end

The biggest enlargement of the European Union took place fifteen years ago. How would you assess it now?

Let’s start at the very beginning, in December 1997. Luxembourg then held the Presidency of the European Union and as Prime Minister I was chairing the European Council. We were discussing enlargement and I was defending it. Some Member States were strongly against opening negotiations with some countries, in particular with Slovakia. Vladimír Mečiar was in charge at that time, but I pointed out to my colleagues that it was not about the Slovak government, but about the Slovak people. In August 1997 I visited Bratislava, met with Mečiar and left with a good feeling. That was why I insisted on negotiating with Slovakia too. The discussions in the Council went on for hours. Therefore, whenever the division between the East and the West is mentioned, I have a clear conscience. Not for one single second did I consider abandoning those countries and I always thought that it was a big moment in history. Some people are saying it was a mistake, but in my view it was a unique opportunity offered to us by history. It was also thanks to the courage of the central European countries that we managed to re-unify Europe. I am still a great fan of the enlargement.

Have your expectations been fulfilled? Relations have not always been the best.

Most expectations linked to the enlargement have been met. These countries have fulfilled the expectations in terms of economic growth, which has been remarkable, put into place the necessary economic reforms and aligned their legislation with EU law despite the huge effort required not only from the governments, but also from the people.