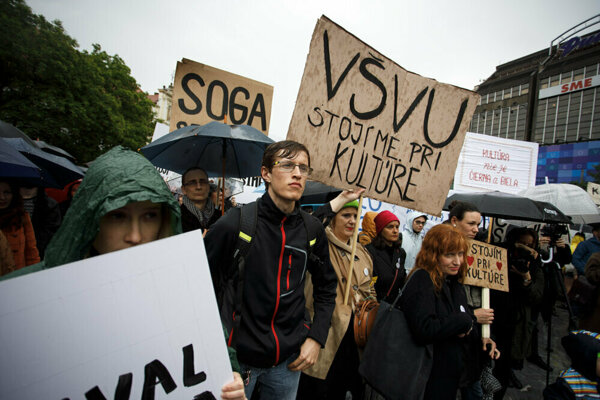 The platform We Stand by Culture organised a protest on May 22 to call on Culture Minister Ľubica Laššáková to step down. (Source: SITA)
Font size:A-|A+  Comments disabled

Following the recent decisions of Culture Minister Ľubica Laššáková (Smer) not to support the projects submitted by LGBTI organisations and to cut the budget for some cultural institutions, a protest was organised, calling on her to step down.

The gathering, held in front of the Culture Ministry on May 22, was organised by the We Stand by Culture platform, which unites cultural organisations and individuals, the SITA newswire reported.

“She has definitely lost the trust of the members of the cultural scene,” organisers of the protest claimed, as quoted by SITA. 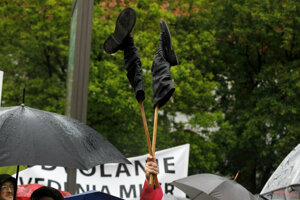 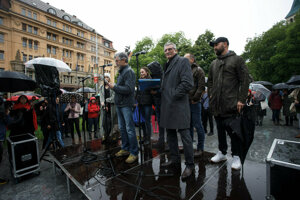 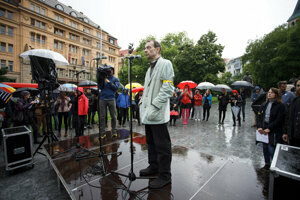 It is not the first time Laššáková has faced the criticism of artists and cultural organisations. There was also a petition calling for her dismissal, the Denník N daily reported.

The protest gathering took place in response to Laššáková's decision to reduce grants for several cultural organisations, including the Slovak National Museum (SNM), Slovak National Gallery (SNG) and Kunsthalle Bratislava (KHB). In addition, she did not want to approve money for LGBTI projects, even though six of them had been recommended by experts sitting in the ministry's commission.

“By taking such steps, she ignores the needs of professionals and polarises Slovak society,” the protesters said, as quoted by SITA. 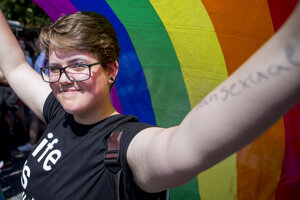 In the case of creative centre Kunsthalle Bratislava, whose budget was drastically reduced, Laššáková essentially denied her publicly declared promise to make KHB independent, including its funding, protesters said.

The minister refutes the criticism

The Culture Ministry has already refuted the claims regarding cuts in the budgets of cultural organisations, which fall under the ministry.

“The budget of the Slovak National Gallery, of which Kunsthalle Bratislava is a part, increased by €200,000 compared to last year,” said Laššáková, as quoted by SITA. The ministry is continuing discussions about the separation of KHB from SNG, she added.

However, the demand of €710,000 for an annual budget of KHB is beyond today's financial possibilities of the ministry, Laššáková claimed.

“If they take money for our activities away from us, they not only take our presence away from us,” said Lucia Gregorová Stach of SNG, as quoted by the Sme daily, “but also steal the future of this culture.”

The minister to oversee LGBTI projects

Regarding the LGBTI organisations, the Culture Ministry has invited them to the round table to hold a debate on their projects.

In the meantime, the second call for submitting projects within the Culture of Disadvantaged Groups programme was opened on May 2. LGBTI organisations can ask for grants again. 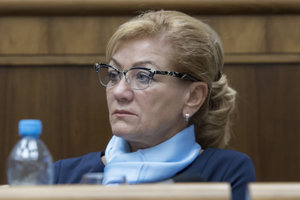 “The culture minister herself will oversee the second call so that no disadvantaged group asking for the grant feels discriminated against,” said the ministry's spokesperson, Barbora Palovičová, as quoted by SITA.

Yet, the ministry had changed the conditions of the programme without any prior consultations, We Stand by Culture protesters said.

Hence, Laššáková is killing the development of the minority culture and international cooperation, the protesters added, as reported by SITA.

“Slovakia deserves a culture minister who does not try to silence the diversity of their own country as it is the source of the richness of our culture,” said Roman Samotný, representing LGBTI organisations, at the gathering, as quoted by the Sme daily.

Apart from the protest, a petition calling on the minister to step down due to her incompetence and intervention in the decisions of experts was launched on May 16. To date, roughly 7,500 people have signed it.