The warning will be in place until morning of May 23. 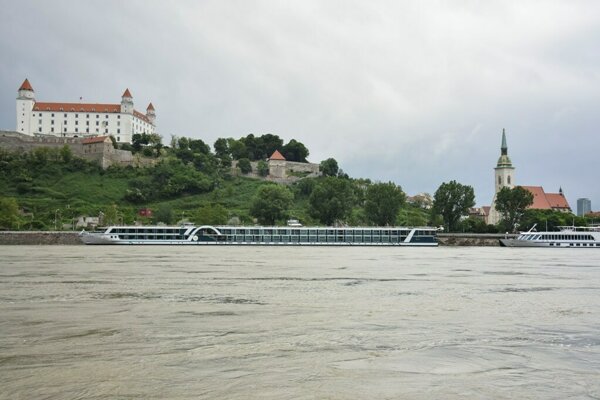 The increased water level of the Danube in Bratislava. (Source: TASR)
Font size:A-|A+1

The northern districts of Slovakia have to prepare for the threat of intensive rains and floods in the upcoming days.

The Slovak Hydrometeorological Institute (SHMÚ) issued both first- and second-level warnings against rain for most northern districts in the Trnava, Trenčín, Žilina and Prešov Regions, valid until May 24, 6:00. In some places, up to 120 millimetres of precipitation may fall.

At the same time, in all northern Slovak districts, along with the districts of Michalovce and Sobrance (both in the Košice Region), SHMÚ issued warnings against floods. In many cases, there is a second-level warning that may endanger people’s activities and cause damage to their property, the TASR newswire reported.

Firefighters on the watch

As many as 290 professional and volunteer firefighters intervened in more than 80 incidents until the morning of May 23.

The most interventions were reported by the Žilina Region, where they were called on 47 cases. There were 11 interventions in the Trnava Region, nine in the Bratislava Region and six in the Trenčín Region.

“They mostly helped with the removal of fallen trees from streams and roads, draining water from flooded streets and cellars, and monitored the situation,” said Katarína Križanová from the Fire and Rescue Corps Presidium (HaZZ), as quoted by TASR. 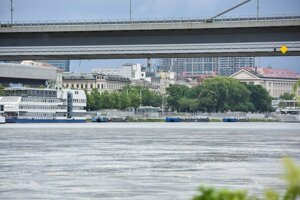 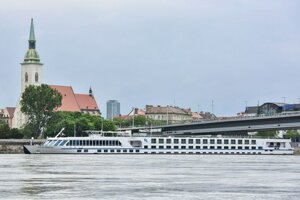 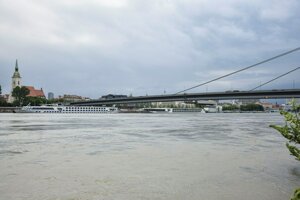 The Danube has also risen

Meanwhile, the water level of the Danube significantly increased. Close to the Devín station, it reached 495 centimetres on the morning of May 22, which was 174 centimetres more than the day before.

In Bratislava, the level was 593 centimetres, which was 152 centimetres more than on May 21, the SITA newswire reported.

On the morning of May 23, the water level stood at about 570 centimetres. It is now expected that the Danube will gradually drop.

“The Danube’s water level has increased, but there is no threat of floods,” said Marián Bocák of the Slovak Water Management Company, as quoted by SITA.

Meanwhile, a curious situation emerged in Čadca, where one man decided to fight the floods in a very interesting way: