The organised crime group was detained within the Octopus operation. 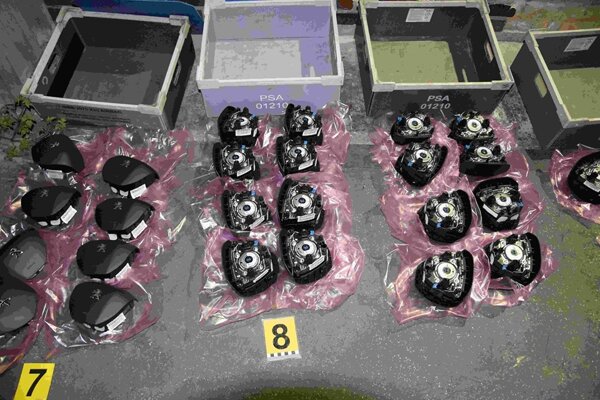 The Octopus raid led to the arrest of seven people, who had stolen car components from a company producing them. (Source: FB Police of the Slovak Republic)
Font size:A-|A+

The police raided several places in the districts of Trnava and Hlohovec on May 27 in connection with a gang of thieves, who stole car components straight from the local car manufacturer and traded them elsewhere.

“Three people were caught in Trnava when they unloaded the stolen goods, which they had previously driven straight out of the company, using a lorry,” said Mária Linkešová, a spokesperson for the Trnava regional police.

Although the police did not say which company they stole from, the logos on the Peugeot and PSA signs, depicted in the photos mapping the evidence, may serve as a hint.

Prior to the raid, which was titled the Octopus, the four police had been collecting information on each member of the gang, the hierarchy within the group, and how they had planned the thefts, Linkešová added.

The police then carried out several raids in a number of houses and other premises, finding about 600 airbags and a large amount of money.

“The damage caused by the stolen car components has been calculated at about €149,000 so far,” said Linkešová. “Other damage, caused by the organised crime, is estimated to be at least €300,000.”

In total, seven people were detained and charged with theft, for which they can spend from 10 to 15 years in prison, the police said on Facebook.