In thirty seconds you can show quite a lot

This is certainly true of the video competition ‘How the Eurofunds helped my region and city’. 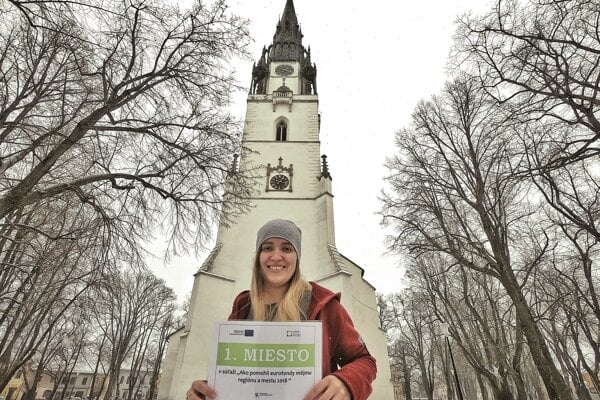 Mária Dirgová became the winner of the How the Eurofunds helped my region and city 2018. In her video spot, she presented projects supported by Eurofunds in Spišská Nová Ves.
Font size:A-|A+

In 2018, young people again proved their originality, skill, and the fact that they are not indifferent to what is happening around them.

In the spots that they entered, they captured what had managed to be done with eurofunds in their immediate surroundings. The imaginary gold medal went to Spišská Nová Ves. “As a proud Spišička I did not hesitate for a second and decided to shoot a spot about my home town. Boards with the European Union logo are to be seen on a number of buildings - a sign of successfully implemented projects. “As soon as school duties and weather permitted, I started filming,” revealed Mária Dirgová, who won with a video entitled Development of Spišská Nová Ves thanks to EU support.

Shooting took her one afternoon. She took her bicycle and camera and covered the whole city. She needed more time for the post-processing of the material because she wanted the final result to be just right. "I was very pleasantly surprised how everything went. I didn't expect so much attention at all. My winning spot was shown on our school internet site, even the town of Spišská Nová Ves itself praised it on it’s social network, and I was also approached by the city magazine for an interview, ”added Mária Dirgová.

Nina Chorvátová from the Business Academy in Dolný Kubín with a spot called Cyklotrasa (Cycle Path) finished second. The third was Adam Spodniak from the Grammar School of Božena Slančíková Timrava in Lučenec with a video showing the transformation of Zichy's manor house in Divíne. The competition’s video spots were judged by an expert committee composed of representatives of the Government Office of the Slovak Republic as publicizer and organizer of the competition, as well as media experts from the Office of the President of the Czech Republic and Protos Production. The main criteria were to grasp the themes, creativity, originality, processing and innovation.

The Eurofunds Competition helped my region and city meet the requirements of the Joint Communication Actions, the seven joint communication activities that came from the activities of the European Commissioner for Regional Policy Corina Cretu and Marianne Thyssen, European Commissioner for Employment, Social Affairs, and Job Mobility. Slovakia is one of the few European countries to implement this plan in the majority of points.