The winning teams have taken the awards

The award ceremony was an unforgettable experience for the winning team members. 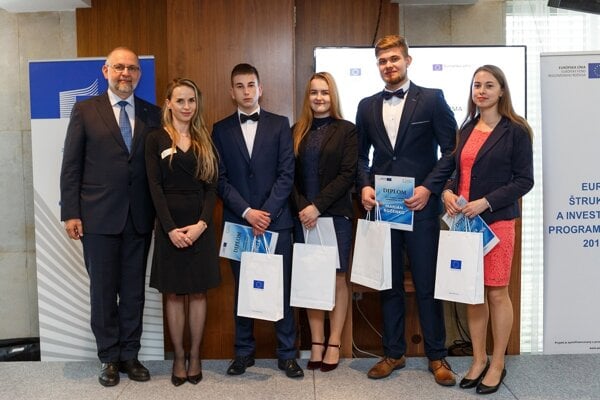 Head of the European Commission Representation in Slovakia Ladislav Miko, Director of the Information and Publicity Department of the Government Office of the Slovak Republic Mária Brhlovič Cacáková and members of the winning team from the Technical Academy in Spišská Nová Ves: Andrej Širilla, Lenka Iľašová, Marián Boženko, Lenka Kopaničáková.
Font size:A-|A+

To devise a project related to real life in the region, to prepare it according to the rules applicable to actual Eurofund projects and to enter it within the deadline, these were the main criteria of the competition for secondary school students, organized by the Government Office of the Slovak Republic under the title Roadshow 2018.

The award ceremony was an unforgettable experience for the winning team members. It was held on 9 May 2019 at the Bôrik Hotel in Bratislava as part of a conference dedicated to the 15th anniversary of our accession to the European Union.

“I also want to draw attention to the work of educators in this competition because it may sometimes be overlooked. It is they who direct students to get the best results from their work. Young people especially can use the opportunities offered by our EU membership. Participants and winners of this contest have shown that they can really do it in the future, ”said Ladislav Miko, Head of the European Commission Representation in Slovakia during his speech.

Last autumn, teachers from the Slovak Government Office visited 30 secondary schools in 20 Slovak towns and met with 900 students. They spoke with them about the eurofunds, the current programming period, about the projects, and how to prepare them to make a contribution to life in the individual regions. The basic task was to write a project objective according to the real outline. To come up with an idea and implement it.

By the end of 2018, 16 projects had been submitted. The Expert Committee, which evaluated them, was composed of representatives of the Office of the Government of the Slovak Republic, the Central Coordinating Body of the Office of the Deputy Prime Minister for Investment and Informatisation and Managing Authorities of the individual operational programs. "The members of the commission were surprised by the quality of the projects submitted," stated Peter Malec from the Government Office of the Slovak Republic.

Most points for the Academy for Seniors

The first place in the Roadshow 2018 competition was awarded to the team called "Seniors" from the Technical Academy in Spišská Nová Ves. The aim of their project, Senior IT Academy, was to establish a programme where people over the age of 50 would be trained in technology and taught by high school students.

"We have a Junior IT Academy at school, and the teacher suggested that older people might need something similar. The project brings together generations. We liked the idea, so we decided to do it. The dates were tight, but we were able to deliver the project on time. At the beginning we thought it wouldn't be so complex, but we gradually discovered that it was necessary to look at things from a number of points of view, ”explained Marián Boženko, a member of the winning team. In his words, if it was a good idea, they would take part in the competition again.

“In the European Union, there are more and more elderly people. Society and businesses are not responding fast enough, although the so-called ‘silver economy’ is already being discussed. Your project is appropriate for those who are willing to engage with and respond to this situation, ”added Ladislav Miko, Head of the European Commission Representation in Slovakia, in the first place.

The second place was taken by students of the Secondary Vocational School of Trade and Services in Krupina with their project "Public Adjustment of Public Spaces". The aim was to create an aesthetic, functional, relaxed and safe public space for all age groups.

Bronze medals were taken by pupils from the same school as the winners - from the Technical Academy in Spišská Nová Ves. The aim of their project was to create an active school-based PR agency in the school that would ensure the operation of the school television, electronic school bulletin board, student website, media publicity and the organization of various events.

The winning teams won a television, laptop or tablet according to their placing. Their schools received funding to buy materials to the value of 10, 8, and 6,000 euros.