No violence, equal rights for all

Students and teachers met in an international team where they had the opportunity to get to know and understand different cultures. 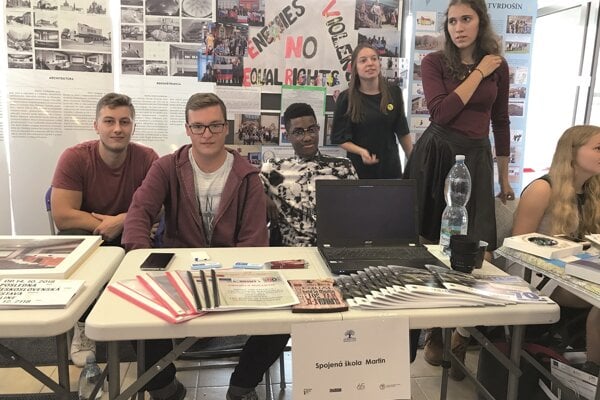 In October last year, students of the University of Martin presented their project at the Project Fair event.
Font size:A-|A+

The pupils of the Martin Vocational school on Czechoslovak Army street met with unforgettable encounters and experiences when they were involved in a project whose main objective was to develop an attitude of openness and tolerance among young people to differences arising from race, culture, religion, health disadvantage or age.

Students and teachers met in an international team where they had the opportunity to get to know and understand different cultures. "It was a fantastic opportunity for three years of experiential learning on the very challenging topics that resonate with contemporary Europe - the refugee situation in Portugal and Italy, the Roma question in Slovakia, the Holocaust in Poland and intergenerational coexistence, genocide during World War II in the Czech Republic, and the religious issue of Islam versus Christianity ,” Explained Andrea Fabrova, a teacher at the Vocational School in Martin, who was involved with the students in realising the project.

The first of the project meetings was held in February 2015 in Portugal. In addition to local students and teachers, teams from Slovakia, Italy, the Czech Republic, Poland and Turkey participated. They had a culinary and dance workshop, debated with African and Roma students from Portugal, had a videoconference, and a discussion with European Deputy José Manuel Fernandes on the theme of tolerance. The meeting also included sports activities and a language workshop.

In Italy they discussed with migrants

A project meeting was held in Italy at the turn of September and October 2015. There were 4 teachers and 3 pupils from Martin who had prepared presentations about their school, about Slovakia, together with a video and a discussion about tolerance. "We presented our quiz partner countries. We met with representatives of government organizations who are dealing with the issue of working with migrants. We compared our views with the experience of our Italian and Portuguese partners, and talked with Turkish friends about the situation in their country. It was very interesting talking with migrants who had made their new homes in Italy, ”said student Lukáš Gašpár on the project website.

A full program in Slovakia

In January 2016, students from seven countries discussed the past and present situation of the Roma minority in Slovakia, and a discussion with representatives of the municipal council on marginalized Roma communities was held in Martin, and some municipalities in eastern Slovakia visited the project participants. There was an unforgettable visit to the Jewish Museum in Bratislava. The pupils of the partner schools prepared presentations on the theme The Ideal School and over one day discussed the topic together. Even the Day of Friendship was filled with activity where students talked about their countries and presented panels with information about them and answered questions. These stayed in Martin and decorated the United School for the duration of the project.

In Poland, they met the city of Torun

In April 2016, the Erasmus + No Enemies Violence - Equal Rights project continued at a partner school in Poland. Slovaks visited the beautiful city of Torun, which is the birthplace of Nicolaus Copernicus, so they also visited the planetarium there. In international teams, they then dealt with tasks connected with this historic town. One of the most compelling experiences was the visit to the Auschwitz concentration camp, where the atrocities of World War II and one of the worst genocides of humanity is commemorated.

Unforgettable experiences in the Czech Republic

This was the fifth project meeting, tasked with dealing with tolerance issues. Students from five countries discussed intolerance and social exclusion, visited a refuge that provides services to abused and abandoned mothers with children, people in need who had lost their jobs or had no roof over their heads. “At the same time, we were deeply touched by the fate of the homeless. We realized that if we have a loving family, a roof over our heads, food, health and work, we have everything because there are people among us who have none of these things. We were also aware of deep thoughts and contemplations, - gratitude for what we have, ”wrote student Lukáš Gašpár on the project website.

In addition to a tour of the town of Chrudim, students in the Czech republic attended a lecture with church dignitaries for a discussion on Christianity. As part of the program, they visited the village of Ležáky, which was destroyed during World War II, and the film about the massacre that took place there engendered strong emotions. They visited the Jewish Museum in Prague, where the guide gave them an absorbing commentary on the Holocaust. The Mayor of Prague also welcomed the students to the Czech capital.

“I would like to express my great thanks to our students who, through a responsible approach to the project, brought added value in the form of quality presentations, a mindful performance and positively represented, not only our United School, but also the whole of Slovakia in such a challenging project. I think I am not just talking for myself when I say that there has been a fundamental appreciation of our whole week of experimental teaching in English in our hearts, ”said Andrea Fabrová, a teacher in the Czech Republic.

The last project meeting was to be held in Turkey, but due to the security situation, the parties agreed to meet again in Slovakia. In May 2017, the project teams visited the United School in Martin, where they presented presentations about "the perfect school" and the problems faced by people with disabilities. In the following days, they dealt with serious issues of today. Students were preparing questions for Turkish local authorities, video questions for Muslim clergy, as well as questions for immigrants from Syria, and promotional materials for the project. Guests took a trip to the High Tatras, went down into Cígeľ Mine, and visited Bojnice Castle.

Over the three years of its existence the project has also provided an excellent opportunity to develop language skills. Participating in international partner school events has shown that meetings with colleagues from abroad is the best way to convince young people that English is extremely useful, both in private life and in seeking employment.