Highlights of the first day of the GLOBSEC 2019 Bratislava Forum. 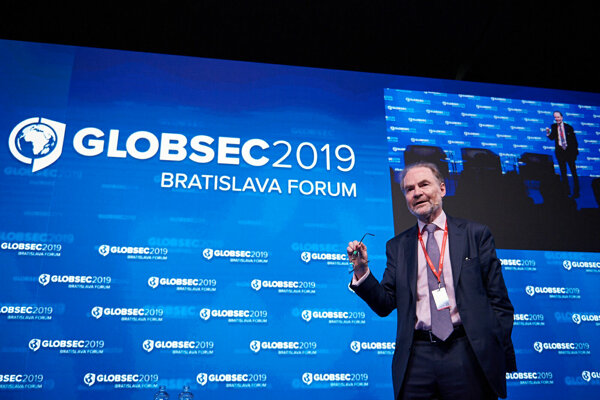 Timothy Garton Ash at the The EU in a Global Crisis of Leadership panel at GLOBSEC 2019 in Bratislava. (Source: GLOBSEC)
Font size:A-|A+4

“Russia as we know it today is determined to disintegrate the European Union,” said Timothy Garton Ash, professor of European Studies at Oxford University on the first day of the GLOBSEC 2019 conference held in Bratislava between June 6-8. The reason for this is the trauma resulting from the break up of the Soviet Union during the years 1989-1991.

Garton Ash was one of 150 speakers at the 14th year of the conference, which welcomed more than 1,300 guests from over 60 countries to discuss topics such as climate change, world trade, the 5G network, relations with China and the results of the recent EP elections.

The world is facing various challenges, Garton Ash said during The EU in Global Crisis of Leadership panel.

He particularly highlighted the multipolar or non-polar world order, features of the rise of so-called private superpowers, where habits of collaboration and peaceful conflict resolution are missing from traditional political stakeholders.

Secondly, he mentioned the Cold War between the USA and China, characterised by global multidimensional competition. 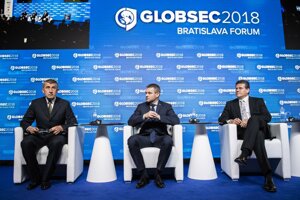 “This is the first period when human kind is threatening life on its own planet,” Garton Ash said when referring to the third dimension. It features new threats including but not limited to climate change, digital revolution and the utilisation of AI.

The crisis the world is in today should be addressed with a long-term strategy, where the EU plays a major role. The EU is not an option but rather a necessity.

“We need the EU to defend our values, interests and shared way of life,” Garton Ash said. “We need it for ourselves in Europe to explain to the next generation what the EU is for. Europe needs to discover its new story.”

Support for the EU is high

Addressing the Globsec 2019 audience, President Andrej Kiska evaluated his last five years in the post, recollecting the various challenges Europe has had to face, including the violation of peace rules, migration, the rise of populism, extremism and propaganda, and new technologies.

“The fact is, that despite all these challenges, after all the difficult times, hearing so often about the end of the EU and the world as we know it, we are doing well,” Kiska said in his speech, which was also his last foreign policy and security address as president before he leaves in mid-June.

He would like the EU to become not only an economic, but also a political superpower, though much needs to be done to make this a reality.

Kiska reminded his audience of the fact that the last two Eurobarometer surveys have shown historically high support for the EU, even in countries with poor relations with Brussels.

Addressing the recent EP elections, Kiska said that people recognised the advantages of being an EU member.

“The catastrophic visions have not been fulfilled,” Kiska continued. “It also showed that if we have a crisis, then it is a crisis largely provoked and fuelled by populists.”

He also highlighted the strong transatlantic bond, describing NATO collective defence as “the best security guarantee we have ever had”. He also believes in the EU’s strong role in world affairs.

At the same time, if we want it to be a respected actor, it cannot depend on someone else’s assistance every time it wants to pursue its interests, the president added.

As for the latest technologies, Kiska stressed the need to take technology-related threats seriously.

“I am convinced that our technological recklessness and lack of strategic thinking in this area is a serious threat to our security,” the president said. “If there is one area where we need to act immediately, then it should be this one.”

Filmmaker and ecologist from Beijing, John D. Liu, addressed the audience at the Can We Reverse Climate Change? panel, stressing the need to use all we know to take large-scale action against this phenomenon.

“It is not that difficult, we are just not focused on it,” Liu said. “We must shift our existing paradigms, and commit to the rejuvenation of our land on a global scale. Yes it is still possible to reverse climate change.”

The participants also discussed the recent informal EU summit in Sibiu, Romania, with Minister Delegate for European Affairs of Romania, George Ciamba, evaluating the presidency of his country. He also stressed the main message of the presidency: to bring back political cohesion to the top of the agenda.

“Because cohesion means solidarity, means unity and that we stand together against discrimination,” Ciamba said.