How many people live in Bratislava? SIM cards helped provide an answer

Bratislava officially has about 422,000 citizens, but the figure goes well beyond, a new study shows. 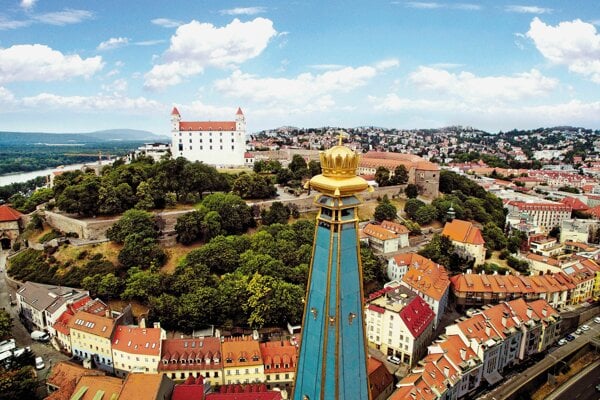 The number of people actually living in Bratislava may be higher than originally expected. This stems from a recent study based on the number of SIM cards localised in the capital, the Denník N daily reported.

Given the 2011 census, roughly 422,000 people are said to live in Bratislava as permanent residents. However, the census did not show how many people could possibly live in the capital temporarily or without permanent residence, the daily pointed out.

“The recorded number of SIM cards with night localisation suggests that there is a higher number of inhabitants in Bratislava and its vicinity than the official statistics shows,” said Martin Šveda of the Faculty of Natural Sciences at Comenius University (UK) in Bratislava, as quoted by Denník N.

Researchers localised 633,806 SIM cards in Bratislava at night, which implies that the actual number of people living in Bratislava may be 200,000 people more than expected. 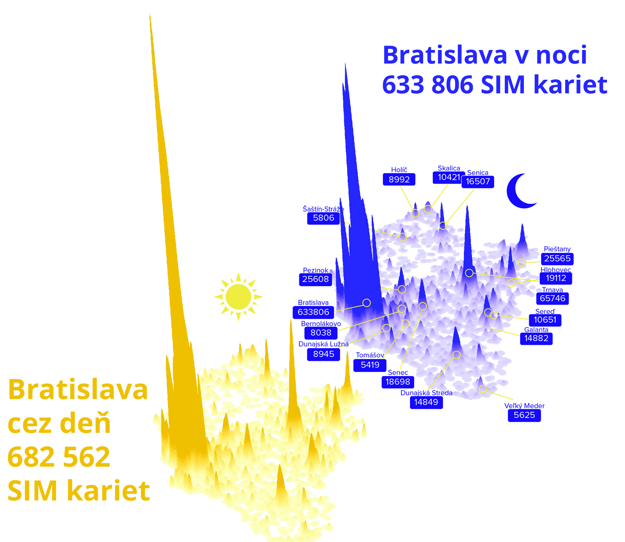 The number of SIM cards in Bratislava during the day, 682,562, and night, 633,806. The latter includes SIM cards of people from other towns staying in Bratislava overnight, even though they do not have permanent residence in the capital. (Source: UK/Market Locator SK via Denník N)

The latest data excludes children and pensioners, who are not expected to possess a mobile phone, and foreign SIM cards. However, if they had been taken into consideration, the figure would be higher, Šveda added.

The analysis was ordered by the Bratislava Integrated Transport (BID) and carried out by the UK, Market Locator SK and mobile operators.

The huge gap between the number of people officially registered as living in Bratislava and those who are not registered causes Bratislava to lose about €100 million in taxes a year. In 2018, the city received €200 million from income tax. However, this tax is distributed among all municipalities.

The more people with permanent residence that live in a given town, the more money the town gets.

“It is essentially a city of 600,000 people, but we get money only for 420,000 people,” said Bratislava Mayor Matúš Vallo, as quoted by Denník N. “Another 170,000 people live and sleep here during the week, but their permanent residence is elsewhere.”

Vallo had been hoping to persuade Interior Minister Denisa Saková (Smer) to make changes to people's permanent residence easier, even before the results of the analysis were published.

For instance, Vallo is trying to make people register their permanent residence in Bratislava under the threat that non-residents will pay higher parking fees.

Trnava does not act as a regional capital

130,000 SIM cards move daily to the capital from Bratislava and Trnava Regions, according to the study.

Of this total number, 404,000 SIM cards are on the move daily within both regions, mostly because of work and school. For instance, 11,000 SIM cards move from Trnava to Bratislava every day, and 27,000 SIM cards also move to Trnava. 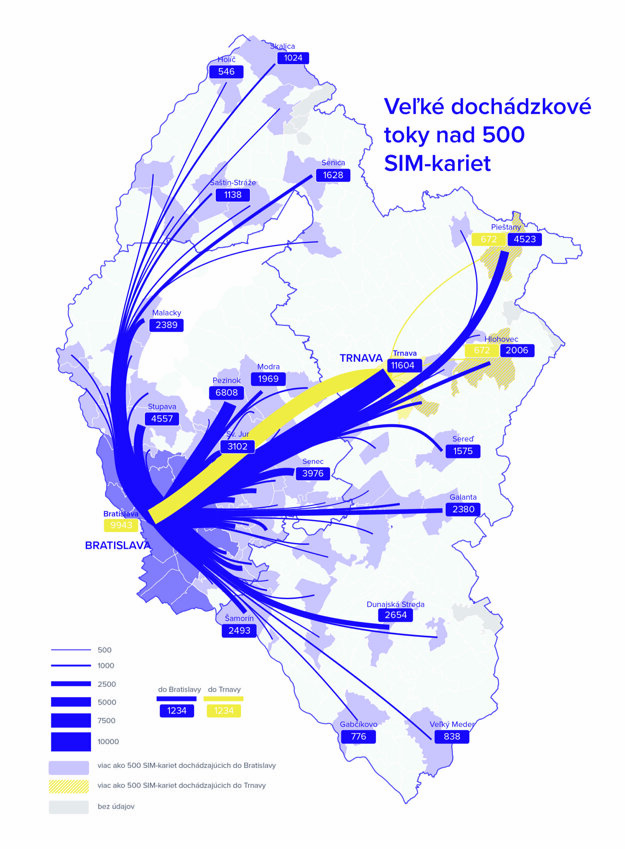 The flow of people commuting daily to Bratislava (blue) and Trnava (yellow) from towns in the Trnava and Bratislava Regions. (Source: UK/Market Locator SK via Denník N)

However, Trnava does not function well as a hub of Trnava Region and a catchment area, Šveda claimed. Most people from Trnava Region, for instance those from Dunajská Streda and Skalica, commute to Bratislava for work every day.

“The formulated criticism of the artificial creation of Trnava Region, which does not respect the natural geographical bonds, has been confirmed,” Šveda added, as quoted by Denník N.