Love Thy Neighbour: How the Church of Sweden advocates for people on the move

On a grassroots level, people tend to solve the problems that might look unsolvable on a macro level, says programme director Anna Hjälm.

Migration as a threat was the most common thread of disinformation being spread before the 2019 EP elections, a GLOBSEC report suggests. (Source: AP/SITA)
Font size:A-|A+  Comments disabled

During the height of the refugee crisis in 2015, Antje Jackelén, The Church of Sweden's first female archbishop, sought American minister Dirk Ficca’s advice on what role she should play as a religious leader in Europe.

As the horrors of the Syrian refugee crisis continued to dominate public and political discourse, it became clear to her that advocating and empowering refugees and migrants across Europe was of vital importance. 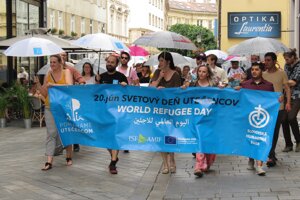 Since 2015, thousands have perished in the treacherous search for safety while refugees who make it to Europe continue to grapple with integration, often at the mercy of those keen on making “others” out of them.

“All religious communities have an obligation towards refugees and migrants - not just in receiving but in the role they play in society,” said Ficca.

The call to action was loud and clear: After three years of planning, the Church of Sweden’s A World of Neighbours initiative began hosting focus groups and conducting site visits across Europe in search of palpable solutions to a humanitarian crisis.

The latest focus group on “Narratives and Media” was held in Bratislava on June 17-20. Members of the Church of Sweden, along with journalists and various NGOs and grassroots organisations throughout Europe, contributed to the roundtable discussion on how narratives in the media shape the public’s perception of refugees and migrants.