The estimated number of affected trucks in Slovakia amounts to 34,000 vehicles. 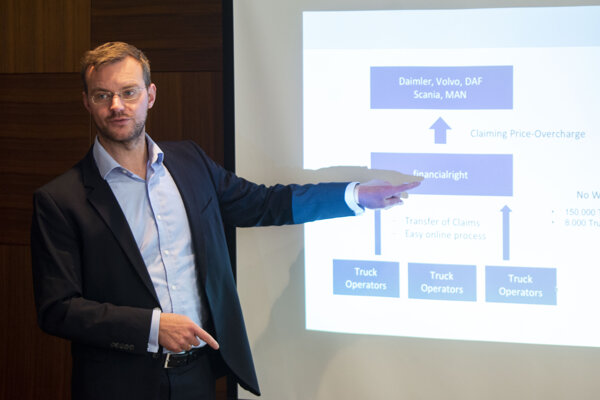 Slovakia’s road haulage association ČESMAD supports the Europe-wide initiative to recover damages of hauliers incurred as a result of a cartel of several leading truck manufacturers. The case around the sale and leasing of trucks at elevated prices concerns about 400 transport companies in Slovakia and more than 10,000 registered vehicles lasting for several years.

“The association offered help to its members, who had the opportunity to join the case and claim compensation for elevated prices of bought trucks via registration,” Martina Baumann, spokeswoman for the road haulage association has informed, as cited by the SITA newswire. “With the law firm Hausfeld, ČESMAD Slovakia has signed a contract on mediation.”

Commercial fleet operators in Slovakia, who overpaid for trucks from firms that colluded in a price-fixing cartel, could recover damages of up to €340 million, as reported by Financialright Claims GmbH and international law firm Hausfeld.

The European Commission imposed fines on leading truck manufacturers Daimler, Volvo/Renault, Iveco, MAN and DAF on July 19, 2016. These manufacturers were found guilty of, through impermissible price fixing, having formed a cartel between 1997 and 2011 for medium and heavy trucks. The European Commission also found that Scania had participated in the cartel and imposed a fine on September 27, 2017.

Financialright Claims and Hausfeld have started a Europe-wide initiative to allow companies that have bought or leased trucks affected by the cartel to recover their damages free of costs or cost risks.

Two large claims for close to 150,000 trucks from all over Europe have already been filed by Financialright Claims and Hausfeld against the trucks cartel at the end of 2017 and 2018, and a third claim is currently being prepared. Companies affected by the cartel can register for this third claim until the end of July 2019.

“Companies can recover up to €10,000 per truck,” said Jan-Eike Andresen (Financialright Claims), as cited in the press release. This would amount to a total of €340 million for Slovak truck hauliers. Affected companies can register free of costs or cost risks on the website www.truck-damages.com.