As many as 160 foreigners from 35 countries want to learn the Slovak language at Comenius University. 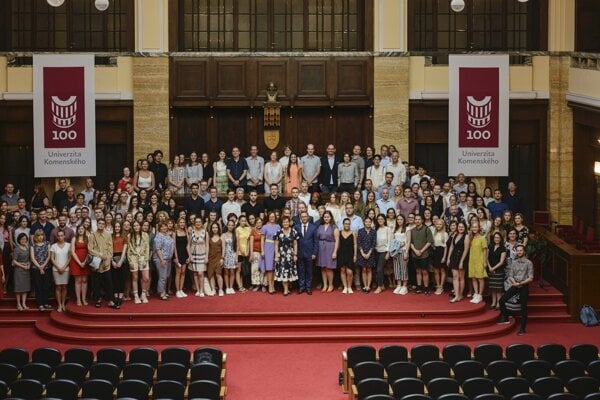 The summer school of Slovak language and literature opened its doors to foreigners for 55th time. A total of 160 applicants from 35 countries will attend the courses held at Comenius University in Bratislava between August 4 and 24.

The summer school is popular mostly among foreign students of Slovak or other Slavic languages, translators, culture workers, interpreters, teachers and foreign language lectors, as well as the descendants of Slovak expats living abroad.

“Most of you are students, but some of you are also Slovak language teachers and lectors from abroad, and we respect that by spreading the Slovak language and culture, you contribute to mutual understanding and communication among people of various nationalities and nations,” said Zuzana Kovačičová, pro-rector for education, at the ceremonial opening, as quoted in a press release.

Foreigners are interested not only in the language, but also culture and life in Slovakia.

“I’m really interested in studying the Slovak language and all cultural aspects linked to it,” said Aladdin of Turkey, as quoted in the press release.

Some foreigners return to the summer school repeatedly. This is also the case for Zoya of Russia. She said she is looking forward not only to the language and linguistics, but also the accompanying events.

“For me, the summer school is a unique chance to spend time in a nice city with interesting people,” she said, as quoted in the press release.

Apart from education, the students will attend various folklore and pop music concerts, and also an evening of folk culture and creative workshops. In addition, they will attend a performance in Radošinské Naivné Divadlo, SĽUK and various trips in regions.