This June was historically the hottest in Bratislava. 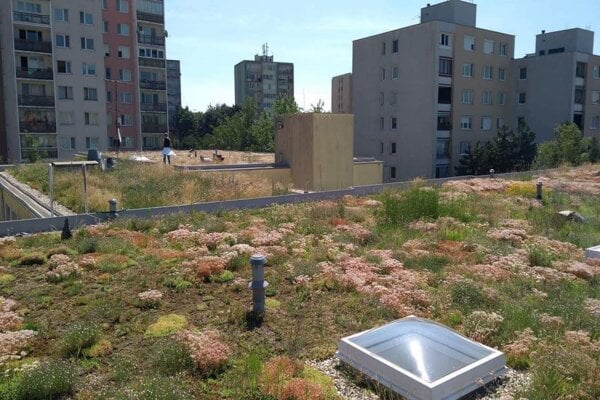 The extensive green roofs are those which, instead of traditional covering, are covered with low-maintenance plants. (Source: Courtesy of the Bratislava city council )
Font size:A-|A+23

Temperatures significantly above 30° Celsius, hot concrete and asphalt, and dried greenery. This is how many Slovak cities look during the summer and Bratislava is no exception. One of the measures that can reduce the overheating of cities is green roofs.

“If most of the roofs in a city are green, the maximum daily temperature might be several tenths of a degree lower,” Juraj Holec, from the Slovak Hydrometeorological Institute (SHMÚ), told The Slovak Spectator.

This summer so far has been very warm in Bratislava and meteorologists estimate that it will end up among the five hottest summers since at least 1951. The historically warmest June of 2019, which resulted in Bratislava having an air temperature of almost 24° Celsius, contributed significantly. This was 5.5° Celsius above the average temperature between 1961-1990. July was also very warm with a temperature higher by 2.8° Celsius from the average.

The period from 1 June to 31 July this year will be listed in the records, too.

Last year, when exploring urban heat islands in Bratislava, SHMÚ employees alongside colleagues from the Soil Science and Conservation Research Institute (VÚPOP) found out that the warmest place in Bratislava is around Riazanská Street, while in the city centre it was Primate’s Square. This year they repeated some measurements, but have not processed the results yet.

Urban heat islands occur mainly in built-up areas with large areas of asphalt, concrete or paved surfaces. As a consequence, they are significantly warmer than rural areas.

“Artificial surfaces accumulate heat during the day and there is little vegetation that can retain water and have a cooling effect,” SHMÚ experts wrote in last year’s analysis.