Protesters: The most important task is now ahead of us

For a Decent Slovakia protests continued around Slovakia on September 20. Two more gatherings are planned before the 2020 election. 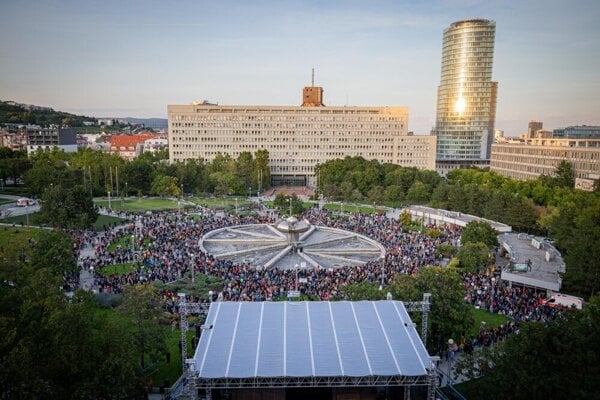 Friday's protest mood continued around Slovakia into the evening, when another For a Decent Slovakia gathering took place. This time with the title "We will not forget. We go on".

What the protesters demand:

- New and trustworthy government - organisers say this is more important than ever, given the scandals that have surfaced since the murder, and given that elections are nearing in Slovakia

The protest movement emerged after the murders of Ján Kuciak and Martina Kušnírová in February 2018. Since then, a string of protests have taken place that have resulted in major changes in the government and in the police corps, the latest in February this year, to mark the first anniversary of the murder.

This time around, the organisers estimate that about 4,000 people turned out in Bratislava's Námestie Slobody square, which was also the venue of the Climate Strike earlier in the day.

Climate change as a protest issue lingered into the evening, when the For a Decent Slovakia organisers expressed their support for the environmental movement.

Some are in politics now