“A manual” for the festival and seven sites choosen by The Slovak Spectator. 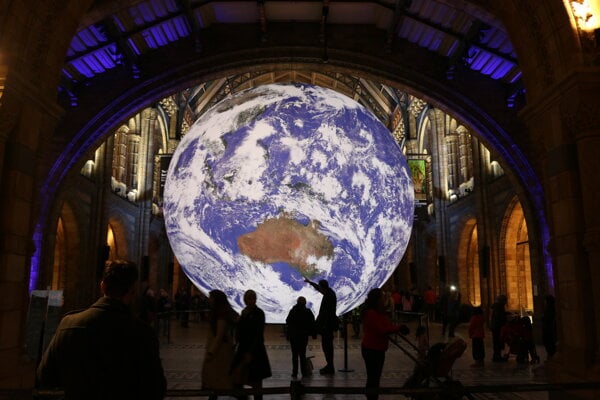 After the successful installation of the replica of the Moon, British artist Luke Jerram returns to Bratislava with a detailed NASA imagery of the Earth’s surface.
Font size:A-|A+92

The multi-genre festival White Night (Biela Noc) will transform Bratislava’s streets into a magical night walk for the fifth time. 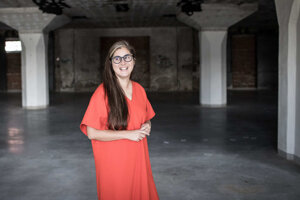 Interview:White Night: People think art should be nice. It does not have to be Read more

This weekend, September 27-29, art works, installations and performances by Slovak and foreign artists, performers, musicians and designers will be presented within 49 sites and events scattered around the city centre and in some more remoted localities. Contrary to previous editions, this year the contemporary art festival will extend into the whole weekend with attractions available during all three nights.

“With the festival we want to show the importance of art in the public space and popularise contemporary art among the general public,” said Zuzana Pacáková, festival art director, adding that for the first time, a permanent art work will be ceremonially unveiled in the Zuckermandel development on the Danube embankment. “This is the first permanent interference into the public space within our festival.” 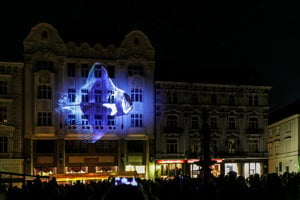 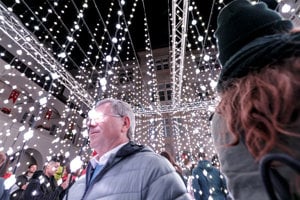 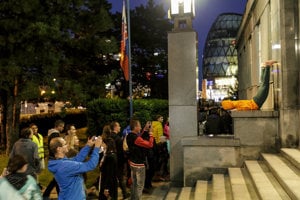 It will be a sculpture – the self-portrait Circle Head by Viktor Frešo, that will be in contrast with character heads by baroque sculptor Franz Xaver Messerschmidt, who used to live and created his most famous work nearby.

The festival will traditionally concentrate in the city centre and its Danube embankment with the most remote spots in Petržalka (apart from the Sad Janka Kráľa public park it will be the Lúky House of Culture on Vígľašská 1, the Photoport gallery on Rovniankova 4 and the Temporary Parapet gallery on Vlastenecké Square 7) and Nové Mesto (Nová Cvernovka at Račianska 78). In the city centre, the most remote sites include Panorama Park just behind Eurovea, the office tower of VÚB bank, the National Bank of Slovakia, Pistori Palace and the River Park on the Danube.

The festival will ceremonially start at the new Zuckermandel development on the Danube promenade on Friday, September 27, at 20:00, unveiling a permanent installation by Viktor Frešo, called Circle Head. During all three festival days the programme will last from 12:00 until midnight, except events held at scheduled times.

Most sites are accessible free of charge, but for some indoor sites or with limited capacity access you need a €15 pass until September 26. It is possible to buy one online at www.bielanoc.sk. During the festival, tickets will be sold at three locations on Friday 12:00-midnight, Saturday 12:00-midnight and on Sunday 12:00-20:00:

-Promenade of Eurovea, close to the children’s playground, Pribinova 8

The festival organisers, in cooperation with VÚB bank, have again created an application, both in Slovak and English, for mobile phones: Biela Noc. It is already available at Google Play and the App Store free of charge. It contains a map, descriptions of the works and their creators as well as photographs, so visitors can better decide whether they want to visit a site or not. The app offers the possibility of creating one’s own route and navigating along it as well as opt for already created festival routes. It will also inform its users about possible changes in the programme and organisation of the festival. The organisers recommend having a look at the festival programme in advance and to choose the preferred sites.

There are two festival routes – a water and historical one. The water route goes along the Danube from River Park to Eurovea City. The historical route leads via the city centre.

The Selaví Restaurant on Klobučnícka 4 joins White Night for the first time with a thematic four-course degustation menu, to be served on September 28 and 29.

The organisers recommend visitors to leave their cars at home and use the extended public transport during festival nights.

Regional transport will be extended during the first two festival nights, with added night buses on regional lines 215/245, 525, 540, 630, 737 and 740 departing from the temporary Nivy bus station on Bottova Street towards Malacky, Slovenský Grob, Modra, Senec, Šamorín and Tomášov starting at 0:20.

There will be two competitions – one for the best Instagram photo and the other for best photo of the White Night festival.

-The Big Mass by German Plastique Fantastique, Main Square, daily 12:00-midnight – the 130 m2 bubble pointing out the danger of clogging the world with plastic will change over the festival to provide space for various performances, discussions and concerts on Friday 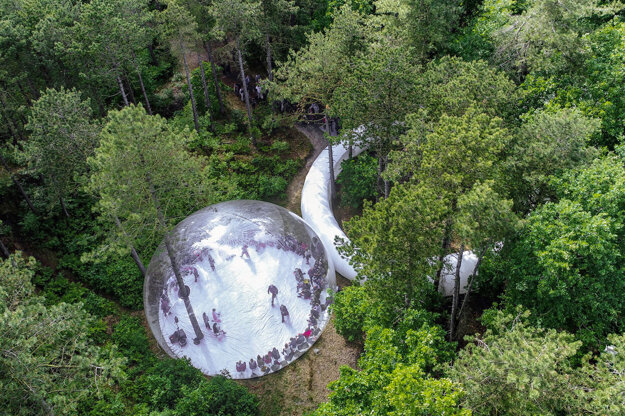 -Axiom by Australian artist Kit Webster, Sad Janka Kráľa park in Petržalka, daily 19:00-midnight – this will be the biggest digital multimedia installation within the festival 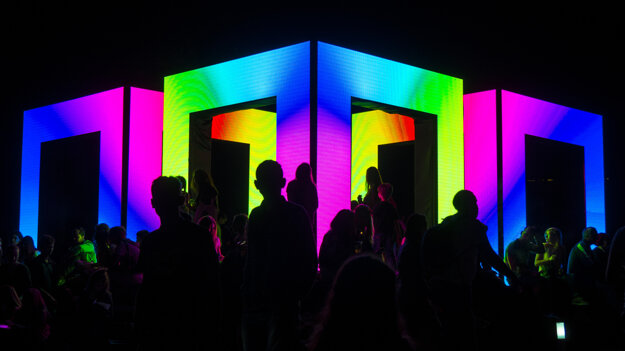 -Gaia by British artist Luke Jerram, atrium of Comenius University at Gondova 70/2, daily 12:00-midnight – after the successful installation of the textile replica of the Moon floating in the Medická Garden, Luke Jerram returns to Bratislava with detailed NASA imagery of the Earth’s surface measuring seven metres in diameter 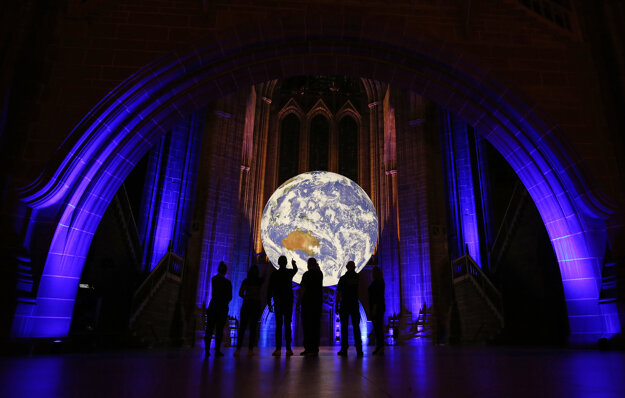 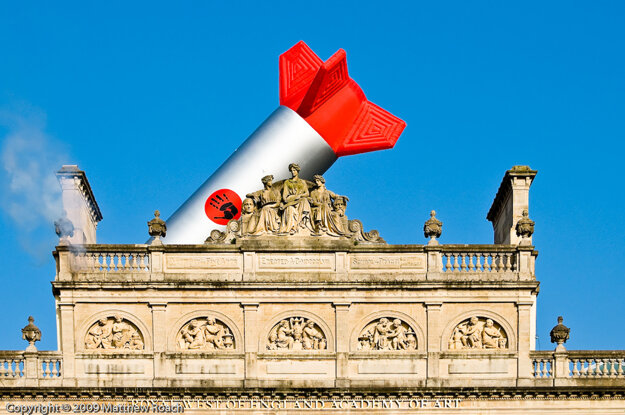 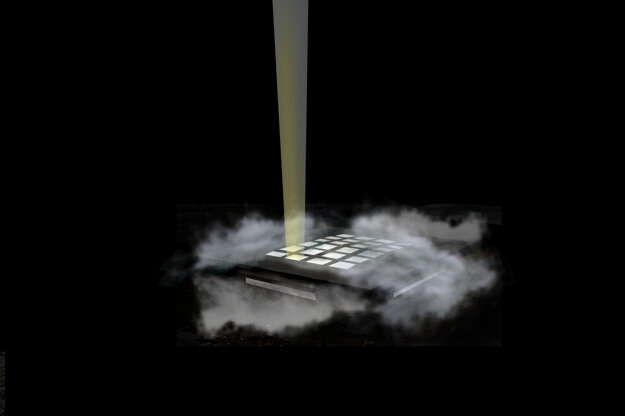 -Octopus by Filthy Luker & Pedro Estrellas, on Warehouse No. 7, Pribinova 7, Eurovea City, daily 12:00-midnight– a giant octopus with colourful writhing tentacles will emerge from the iconic historical industrial building on the Danube embankment 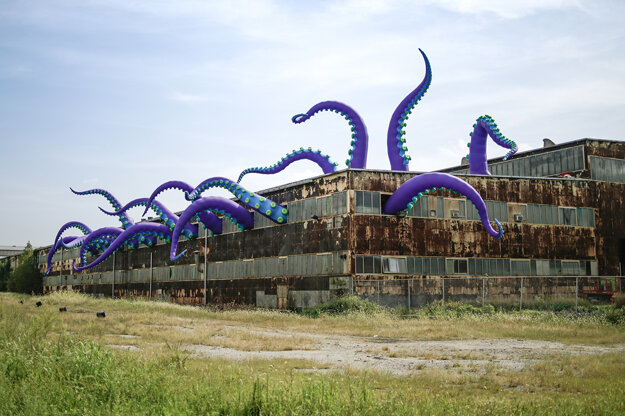 -Play of Light by Slovak BN Label – the National Bank of Slovakia, Imricha Karvaša 1, daily 19:00-midnight- the once tallest building in Bratislava, the 111-metre iconic tower will become the city’s lighthouse with 24 beams shining from its roof 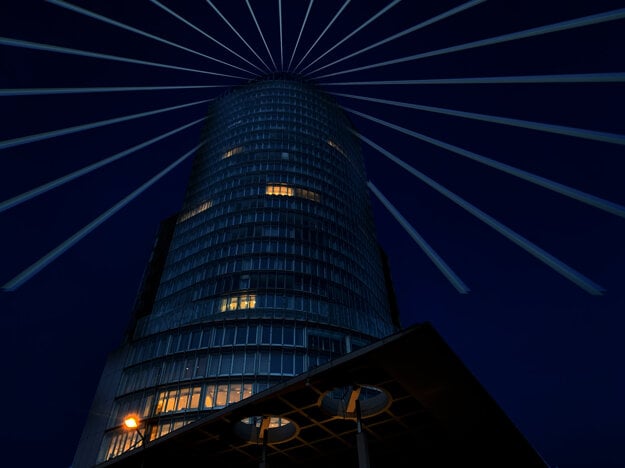