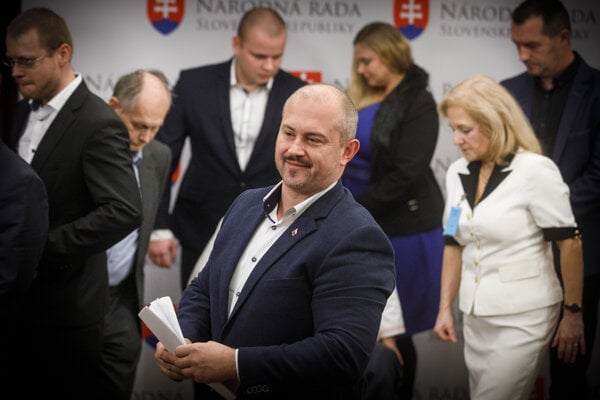 In the first part of the series, we look at option one: Smer wins the election and forms a coalition government.

One of the iconic images of the 2012 parliamentary elections was Robert Fico, with a bottle of cola in his hand, grinning while colleagues from his Smer party threw him into the air as they celebrated a crushing election win.

With 44 percent of the vote, Smer became the first party in Slovakia’s post-communist history to rule without the need of a coalition partner. 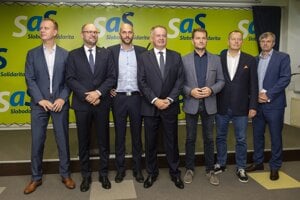 They had spent just two years in opposition. The short-lived government led by Iveta Radičová of the Slovak Democratic and Christian Union-Democratic Party (SDKU-DS) fell after clashing with coalition partners over the European Financial Stability Facility (EFSF) – a Eurozone bailout fund.

The 2012 campaign was marked by the scandal around the now infamous ‘Gorilla’ file, which appeared on the internet at the time. It contained information about alleged massive corruption among high-level politicians, officials and businessmen dating back to 2005-2006.

Smer is seen as highly unlikely to get anywhere near the same kind of support in the upcoming elections and will probably finish well below the 28 percent it won in 2016 parliamentary elections. But it remains the strongest party on the Slovak political scene with support currently oscillating around 20 percent.

However, while polls suggest that Smer may win the election, there are few parties openly willing to join it in any ruling coalition.

“[Smer’s] coalition potential is very low, but it is not zero,” political analyst and director of the Bratislava Policy Institute, Viera Žúborová, told The Slovak Spectator.

Opposition parties including Progressive Slovakia and Spolu (PS/Spolu), Ordinary People and Independent Personalities (OĽaNO), Freedom and Solidarity (SaS), Za Ľudí, Christian Democratic Movement (KDH), as well as the junior ruling coalition party Most-Híd, have said they would not go into a new government with Smer.

With the party’s options limited, some political analysts say Smer could join forces with the far-right People’s Party Our Slovakia (ĽSNS).

Polls often show ĽSNS with the second highest support among parties, behind Smer.