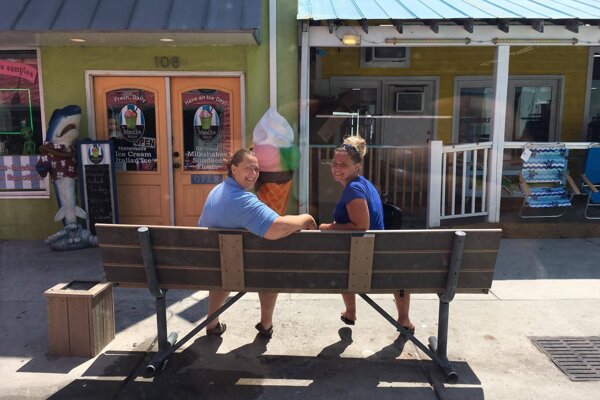 As in the past weeks, Mária Šišková repeats her routine of opening Let’s Sail, a surf shop with a huge shark replica overseeing the shelves with piles of clothes. She is in Carolina Beach, a resort town by the Atlantic in southeast North Carolina, which has already woken up to another hot July morning.

“Rise and shine!” Mária, a Bratislava-born university student, greets her friend Heather with a central European accent while placing a red lifeguard chair outside. 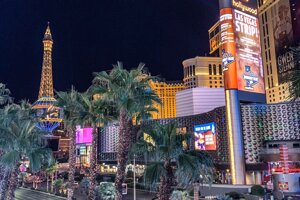 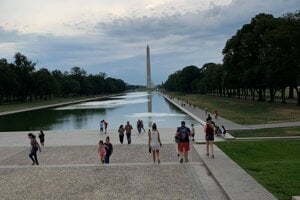 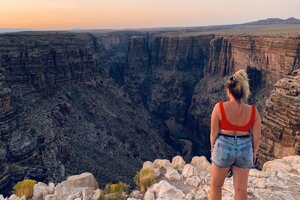 Heather is a middle-aged and smiley American who manages an ice-cream parlour a few metres away from the shop where Mária works. Along with the large ice-cream cones and shark replicas, her t-shirt with the saying “I Make Ice Cream Disappear. What’s Your Superpower?” makes any customer’s day.

Both colourful shops and other tourist-fuelled businesses are part of the Carolina Beach Boardwalk, one of the resort’s most visited spots spreading along a beach, where Americans enjoy their summer riding carousels, listening to live music and swimming.

“Everyone’s smiling and they start a conversation with you anytime,” Mária said in awe. Strangers even paid for her meals twice, wishing her a nice summer in the USA.

She knew right away she could not miss the chance to see her idol again. It was Mária’s last night in America before her plane took off the next day from New York City.

Maria is one of the over 2,000 Slovak students who set out on a four-month adventure to the United States last May within Work & Travel, the USA’s largest student exchange programme, to experience America and improve their English.

Off to work on a ferry

About 1,000 kilometres up north from Carolina Beach, another Slovak student Patrícia Prašovská worked as a housekeeper with other internationals on Fire Island, which is just a stone’s throw away from New York City.

“This job is not for everyone,” she said. Patrícia used to work as a housekeeper in the winter in the French Alps when she was in secondary school, but cleaning up to 12 rooms in four hours was a challenge in the USA.

Neither Patrícia nor Mária attended job fairs or held a Skype interview to get a job, unlike others, prior to their departure. An employer chose Mária based on her resume and video, while Patrícia found a job through her friend.

Every morning, Patrícia would wake up around six o’clock, get on a small ferry from Long Island, where she was living, to nearby Fire Island at seven, and sip coffee or have a walk on the beach before work started at nine. Work ended in the late afternoon.

“Who could say they commuted to work on a ferry?” she noted wittily.

Nevertheless, it took her several days to get used to her new life in the small town of Bay Shore on Long Island, less than two hours from Manhattan by train and dotted with marine-styled restaurants, and to Fire Island, where bicycles and golf buggy carts are the only means of transport.

Patrícia also has many unforgettable memories, like a party at a Brooklyn venue with a view of Rockefeller Center and the town of Montauk on Long Island, home to a splendid lighthouse and beaches.

“It is a holiday island,” she said about Fire Island. “All bars, clubs and beaches are overcrowded in summer.” Her earlier worries that it would be a boring place were not confirmed.

After they have completed their work stints, students on the programme begin, at large, to travel in early September. Travelling the East Coast, the last couple of weeks before her return to Slovakia, there was one moment that stood out for Mária.

“Lana Del Rey published tour dates in mid-summer, and I saw she was going to play in Wantagh, New York,” Mária said.

She knew right away she could not miss the chance to see her idol again. It was Mária’s last night in America before her plane took off the next day from New York City.

Patrícia also has many unforgettable memories, like a party at a Brooklyn venue with a view of Rockefeller Center and the town of Montauk on Long Island, home to a splendid lighthouse and beaches.

“This was a must-see since it is mentioned on Friends,” Patrícia said.

Work & Travel is an experience that requires students to invest money in it at first. They will earn this money back in the first three months. Most people spend the money on travel in September.

“I wanted to make my dream come true,” Patrícia said.