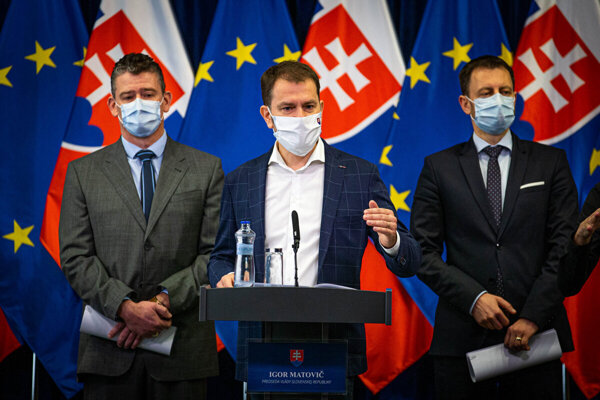 No Easter visits this year. As of Wednesday, April 8, the government restricted freedom of movement for people until midnight of Easter Monday to prevent the coronavirus from spreading in the country.

"There are people among us who have been hit by this illness and they can transmit it," PM Igor Matovič said about the risks of spreading COVID-19 if people tried to stick to traditions and visit their relatives despite the pandemic measures applied in Slovakia so far.

Based on the law on the state of emergency in the country, the limits on movement must be appropriate, which is why the government came up with several exceptions concerning when people are allowed to leave their homes even between April 9 and 13.

The Sme daily answered a list of questions people might be asking themselves about Easter with the coronavirus in Slovakia:

How long will free movement be restricted?

The measure becomes effective as of midnight from Tuesday to Wednesday, April 8. It will last until Monday April 13, midnight.

Will I be able to go to work?

The restrictions do not apply to the commute to and from work, not even for those who work in a different district than the one they reside in.

People do not need any special documents or certificates, the prime minister said on Monday. However, the police informed on their Facebook page that people will be required to show their work contract if they are commuting to work in another district.

I live in Bratislava but my permanent or temporary residence is in another town. Will I be able to go to work without having problems with the police?

The government talks about an usual route to work and back, meaning the measures should not restrict you. PM Matovič said that "those who commute to Bratislava from the east for weekly shifts and then move around the capital during the work day, it is their usual route".

"A journey from Bratislava to Košice is not a usual route like that," he added.

When else will I be able to go out?

The government also allows visits to nature within the district (OKRES) you live in.

Bratislava and Kosice consist of several urban districts. In these two cases, movement with the aim of going out to nature is allowed within the territory of the city.

If you are helping your neighbour with shopping or are taking care of a person in need living in the same district as you do, you can visit them.

The restrictions do not apply to attending funerals, also outside one's district.

I have already purchased a bus or train ticket. Will I receive my money back since I am not allowed to use it?

PM Matovic claims travellers will be eligible for reimbursement.

Who can I meet with?

From Wednesday until Easter Monday you are not allowed to meet with anyone else other than the persons you live in one household with.

This does not concern the above mentioned exceptions, like taking care of a person in need.

What is the rule for divorced couples who share caretaking of children?

Your child will have to stay with only one parent during the days when restrictions apply.

"They will only be allowed to take a walk with the parent whom they share a household with," Matovič said.

Can I go out to nature with a friend living nearby?

This would turn the measure to nonsense, according to the government. We are only allowed to meet people we live with during the stricter restrictions.

I have a holiday cottage in a remote place, I am not going to meet anybody there. Can I go there for Easter?

You must stay home. The government claims they want to prevent contact between people in the widest scope possible, and that concerns your travel to a holiday home.

"There may be 200,000 people who would want to transfer to their cottages. Let's not ruin what we have achieved. That is why they cannot go," Matovič explained.

Nobody is going to check on whether I crossed the district borders in nature, is that right?

That might not be right. The state obviously does not have the capacities to place patrols everywhere, but the government says they will be at all important routes, crossings, and popular spots.

"We reckon some will escape the system, and then might even brag about violating the rules on social networks," Matovič commented. He said he relies on people's responsibility.

What can possibly happen if I go to see my grandparents for Easter?

"Some people will want to prove no measures apply to them. Those who do not obey this measure run the risk of being fined more than €1,500," Matovič said.

The police patrols will be reinforced with 1,500 soldiers of the armed forces.

In practice, people whom they check will have to fill out a questionnaire and the police will go back and check on whether your trip was justified (you were either on your way to work or so) or whether you violated the rules and went to another district for an outing.