Black Hawks and daily plans. How testing is carried out in excluded communities

COVID-19 has so far been detected in 14 settlements, and there are more than a thousand such communities in Slovakia. 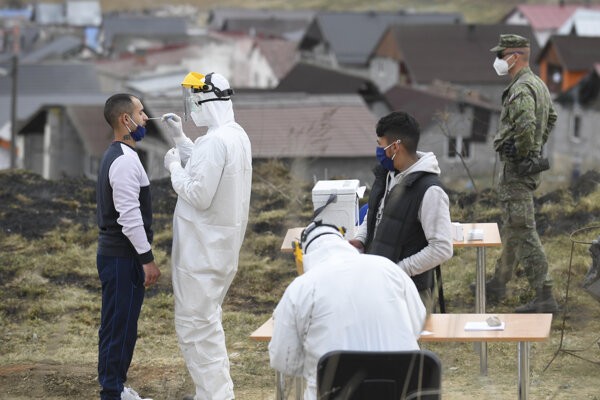 In early April, PM Igor Matovič announced the government had information that some 1,500 people returned to Roma settlements around Slovakia from abroad.

Throughout the country, new COVID-19 infection epicentres might have emerged around the country and that was why he insisted that the settlements needed to be tested.

The armed forces were deployed for this purpose. Between Friday, April 3 and Tuesday, April 14, they took altogether 2,560 samples at more than a hundred localities.

The armed forces also used American-made Black Hawk helicopters. These are helping to transport healthcare materials and samples to labs.

Eight teams working in the field have been able to take between 150 and 250 samples every day. Based on the Atlas of Roma Communities, about 207,000 Roma live in excluded communities.

Testing in the settlements

Number of segregated communities outside municipalities - 693

They are thus not testing everyone, only selected at-risk groups, like people who have returned from abroad and their circle. The selection of people who will be tested is up to the Zdravé Regióny (Healthy Regions) organisation running with the financial support of the Health Ministry.

The testing has not confirmed what is known as the community spreading of the novel coronavirus infection, the positive cases are more individuals.

"We are still well off and we do not need to quarantine large areas of Slovakia," said Chief Hygienist Ján Mikas.

As of Thursday, they have tested 110 Roma settlements, and the COVID-19 infection has been confirmed in 14 of them, OĽaNO MEP and former government proxy for Roma communities, Peter Pollák, said ahead of the session of the crisis staff.

How the testing goes