Slovakia has cleaner air thanks to coronavirus measures

SHMÚ analysis confirms the drop in air pollutants in the first month after the strict limitations were introduced. 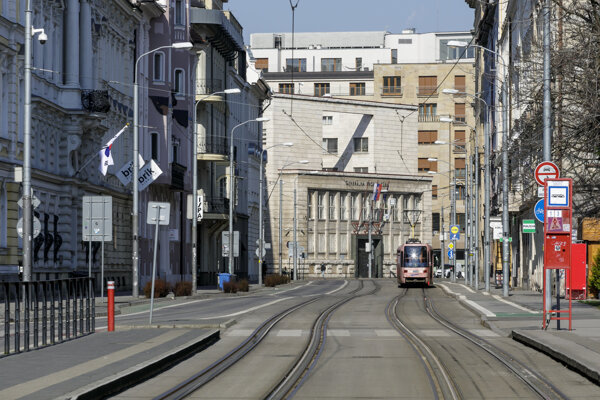 The lower volume of transport has contributed to the improved air quality in Slovakia.

In the first month of introducing strict measures to fight the coronavirus pandemic, the concentration of pollutants produced by transport dropped, according to an analysis carried out by the Slovak Hydrometeorological Institute (SHMÚ).

It monitored the period between March 13 and April 13, 2020, i.e. the first month since the limitations were introduced, and compared it with the previous years and the 10-year average.

Drop most significant at stations near hubs

“A significant drop of concentrations in the period after the measures were introduced was noticed particularly at stations near transport hubs between 6:00 and 20:00; during rush hour at the Trnavské Mýto station in Bratislava; the maximum drop represented 52 percent in the case of NO2 and 64 percent in the case of NOx compared with the 10-year average,” the SHMÚ report reads.

The highest drop in the concentration of NO2 was reported by a station on Štefániková Street in Košice, by 41 percent, while the lowest was in Krompachy, by only 6 percent.

Transport as the main factor

The drop in the NOx and NO2 pollutants around towns and cities has been caused mostly by the drop in emissions due to the coronavirus measures, particularly in transport, which is the main source of NOx pollutants, SHMÚ opines.

It also predicts that while emissions from industry, trade and services dropped only slightly, there was a slight increase in the households sectors since people spend more time at home. The emissions from agriculture should remain at more or less the same level, according to SHMÚ.

The situation for PM10 is more complicated as these concentrations are impacted by cross-border transmission and their main source is local heating. SHMÚ expects that the slight increase in emissions from heating was compensated with a slight drop in emissions from industry, trade and services.

As a result, the main cause for the lower PM10 amounts in the air is the 60-percent drop in the transport emissions, which represents about 5.4-percent decrease in PM10 particles in Slovakia, according to SHMÚ.

“It needs to be mentioned though that the calculation of the resuspension of hard particles from roads when the vehicles passes by causes that PM10 emissions from transport are determined with high inaccuracy,” SMHÚ wrote.