Diplomacy is more virtual for the moment, but personal contact is everything

We are more understanding of people’s personal circumstances than we were before the pandemic, says outgoing UK Ambassador Andy Garth. 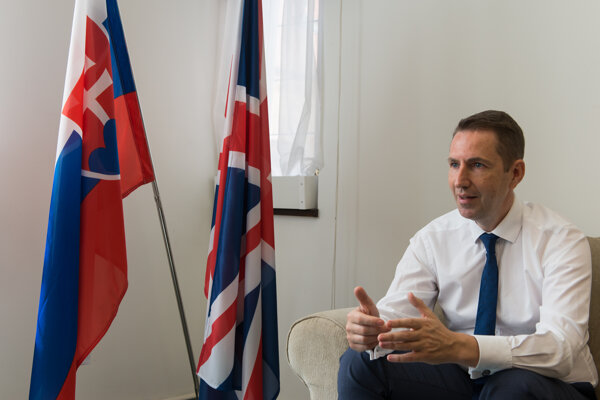 Slovakia has set a very high bar when it comes to future postings, says UK Ambassador Andy Garth in an interview for The Slovak Spectator as he wraps up his unusually long term. During his time in Bratislava, he navigated the Brexit negotiations, witnessed the country in its biggest protests since the Velvet Revolution and learned how to do diplomacy during a pandemic.

TSS: When the British government decided not to allow people from Slovakia into the country without requiring them to go into self-isolation afterwards, it provoked a lot of angry and confused reactions. Foreign Minister Ivan Korčok said it was an error on the part of the British. Was it an error?

AG: Both sides have their experts looking at epidemiology and other factors. The UK’s Foreign Ministry is not involved in these decisions, but British epidemiologists have their own criteria and decided at that time not to expand the list to Slovakia, but they are keeping their list under review. I understand the questions here and we continue talking to the Slovak government. I welcome the fact that the UK is now being moved on the green list in Slovakia.

TSS: So you refute that the British decision could be a political one, as some Slovak politicians put it.

AG: It seems that there’s quite a lot of speculation about the rationale of the decision. Based on the information that I have this was a decision by Public Health England and Slovakia was not alone. There are other countries around the world that were affected, even countries like Slovenia, Estonia and Latvia.

TSS: The first reaction here were jokes that the UK must have forgotten that Slovakia exists.

AG: I think with a hundred thousand Slovaks in the UK it is hard to forget that Slovakia exists.

TSS: How is Slovakia viewed in the UK now? Is it any better known now than it was six years ago, when you first came here?