An overview of the business community’s efforts in improving the rule of law in Slovakia. 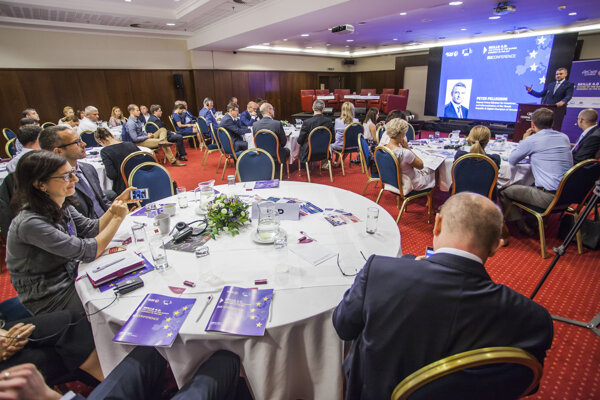 When the Rule of Law Initiative started back in 2014, we knew any substantial improvements would require time. Looking back at the previous six years and four different governments offers us an interesting perspective. What has been achieved? Which recommendations made it from paper to reality? What can the business community expect in the near future? To understand the expectations for the future, it is important to look at the past.

In early 2014, AmCham – representing approximately 340 companies from 27 countries, including some major investors in Slovakia – proposed joining forces and doing something about it.

While former prime minister Robert Fico was officially notified of the nascent business coalition in June 2014, the rest of the year was dedicated to the preparation of a white paper – a joint position along with a proper analysis and policy recommendations.

The Rule of Law Initiative, a joint coalition of 14 major business associations and chambers of commerce, officially presented its recommendations in three major areas to the Slovak government in January 2014.

Surprisingly, the response was relatively quick as the government immediately passed a resolution to prepare an action plan on strengthening the rule of law in Slovakia within the space of several months.

Fast forward six months later and after numerous negotiations and consultations at both the expert and political level, the result was an approved Action Plan – an 80-plus page document.

Despite being announced at a press conference by the prime minister, it had two essential flaws: It lacked real political will and sufficient time for implementation. While the first was the impression shared by many, the second was a fact – most of the measures needed 18-30 months for implementation, yet the Action Plan was approved barely eight months before the 2016 parliamentary elections.

Yet, the Rule of Law Initiative still managed to push through important, albeit technical improvements. We successfully pushed for the introduction of “preliminary information” and “public consultations” as mandatory parts of the legislative process, and the Justice Ministry prepared a completely new Law on Lawmaking.

It meant that ministries and governmental agencies were obliged to inform the general public about the preparation of any legislative change with a written notice at the beginning of the process.

This enabled virtually any relevant stakeholder to be properly informed and address any suggestions, if applicable, and present them at consultations with the specific ministry. While being a small change on paper, it provided more predictability and transparency for thousands of companies and citizens.

To maximise the pressure on all relevant political parties ahead of the 2016 parliamentary elections, the Rule of Law Initiative organised a pre-election debate with political leaders.

When then-justice minister Tomáš Borec, somehow surprisingly, said that he “felt ashamed by many scandals of this government,” he echoed the feelings of most of the business leaders in the conference room.

A few weeks later, once the new coalition government was formed, the Rule of Law Initiative found itself explicitly mentioned in the 2016-2020 government manifesto and the fight against corruption became a governmental priority.

However, after numerous meetings with government and police corps officials, we started to fear what apparently became a reality later on. While the government was happy to proclaim its willingness to improve the rule of law, most of it remained in the declaratory dimension. With the exception of a few individuals, such as former deputy PM and justice minister Lucia Žitňanská, governmental declarations failed to translate into efficient measures during the next two or so years.

When dialogue with the government did not result in sufficient improvements, the Rule of Law Initiative had to resort, in certain cases, to a different form of public pressure.

Considering the real independence of regulatory authorities as a necessary precondition for eliminating possible corruption or market distortion, the Initiative became an active voice of the wider business community, calling for the transparent selection processes of leaders of such institutions.

It was largely thanks to the very first public debate of candidates for the chairperson of the Public Procurement Office in 2017, organised by The Rule of Law Initiative, that a clearly fraudulent selection process was halted. The Initiative, which was later invited by the government to participate at other selections, also played an important role in voicing business community concerns over nominations for the Public Procurement Council or the Regulatory Authority for Electronic Communications and Postal Services.

The last six years have taught us not to be overly confident in governmental declarations and promises. The wider business community still remains united in the need for major improvements in rule of law in Slovakia, clearly demonstrated by the joint declaration “Ten Commandments for a Fair and Stable Business Environment”, addressed to major political parties before the 2020 parliamentary elections.

On one hand, we were glad to see all the current coalition parties agree on a vast majority of our recommendations and subsequently approve a rather ambitious four-year government programme.

However, our experience with different governments over the last six years has taught us not to be overly excited by declarations but to judge only real changes.

We remain committed as the strong voice of the wider business community in the area of rule of law, and we continue to be a platform for expert dialogue between business and government leaders. We are ready to help but want to see real and sincere efforts on the other side.