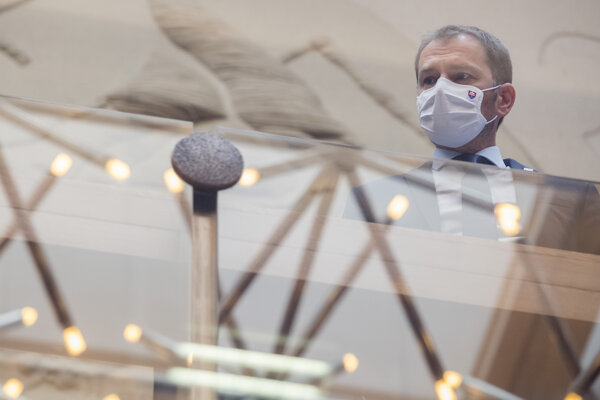 Slovaks know that when they want to learn what Prime Minister Igor Matovič is thinking, all they need to do is check his Facebook account.

Matovič, who was elected earlier this year, posts almost daily about his policy ideas, government plans, and private life.

During the coronavirus crisis the prime minister has used social media to make some of his most strident, and sometimes vulgar, appeals to the population, and criticisms of them.

Only this week, as infection numbers set new records, the PM wrote that he was “disappointed in people” and bemoaned what he said was the nation’s inability to take responsibility into its own hands to combat the virus.

He said it was therefore necessary to “take freedom from everyone” and complained that there were people who did not “give a sh*t” about following anti-Covid measures and pleaded with people to wear face masks to stop the spread of the virus.

But having been voted into office with surprisingly high support in February as his Ordinary People and Independent Personalities (OĽaNO) movement won parliamentary elections with 25 percent of the vote, support for the PM and his party has plunged dramatically, new surveys have down.

And it could be by a combination of his style of communication and the conditions created by the pandemic, some experts say, that is behind what some analysts have claimed is the most rapid tail off in popularity and public trust of any party in modern Slovak political history.

“We have not seen [such a steep fall in party support] as this in the history of the Slovak state,” Tomáš Koziak, a political scientist at the College of Political and Social Sciences in Kutná Hora, Czech Republic, told The Slovak Spectator.

Although OĽaNO’s 25 percent vote share at the elections was unexpectedly and historically very high, six months later that support has dropped to 18 percent, according to a recent poll by the Focus agency carried out at the turn of August and September.

Matovič is also losing trust among people as a politician. In another recent poll conducted by Focus, he was rated the fifth most trusted politician, behind President Zuzana Čaputová, his predecessor as PM Peter Pellegrini (Hlas) and leaders of two other parties in the OĽaNO-led governing coalition - Boris Kollár of Sme Rodina and Richard Sulík of Freedom and Solidarity (SaS).

About one third of the respondents said they trusted Matovič, while more than two thirds said they did not.

Sociologist and director of Focus Martin Slosiarik said many of the voters who had apparently abandoned OĽaNO since the elections had switched their support to SaS and Sme Rodina. Others though were today undecided who they would vote for.