Experts say it is disputable to ask people about election. 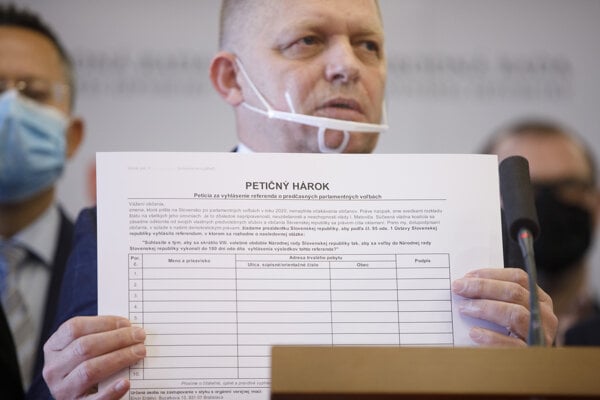 In his ten years in the opposition, Igor Matovič belonged among the politicians who displayed a sense for both the formal and informal tools of direct democracy.

In 2019, he and his OĽaNO movement proposed what they called an in-depth referendum, with 17 questions regarding different issues ranging from a major change of the election system to such details as the scrapping of co-payment for medicines. The idea to hold the referendum was later abandoned and one year later an election victory elevated Matovič unexpectedly to the highest governmental post.

Less than one year into his term, the current opposition is attempting to use the referendum as a tool to put a premature end to Matovič's rule.

The petition sheets have been available on the Referendum 2021 website. If at least 350,000 people sign them, Slovakia should see a referendum with one question: do you want to shorten the term of the current government and an early election to take place 180 days after the results of the referendum are announced?

Even if the attempt is successful, there is a long way to an early election. Observers are skeptical about whether Slovakia would end up seeing an early election based on a referendum. They more expect it to be turned into a months-long mobilisation campaign of the opposition electorate.

Former PM and now head of the non-parliamentary Hlas party, Peter Pellegrini, has been talking about a referendum since December, but since the actual petition was started, bearing neither his name nor that of his party, he has claimed that he did not start it but does support it.

Smer, the party of another former long-time PM Robert Fico, supports the referendum too, and calls on its supporters to sign it.

Voters turn away from Matovič

This attempt to shorten the ruling period of parliament has come when trust in PM Matovič’s has plunged, along with declining support not just for his OĽaNO but also some other parties of the ruling coalition he leads.