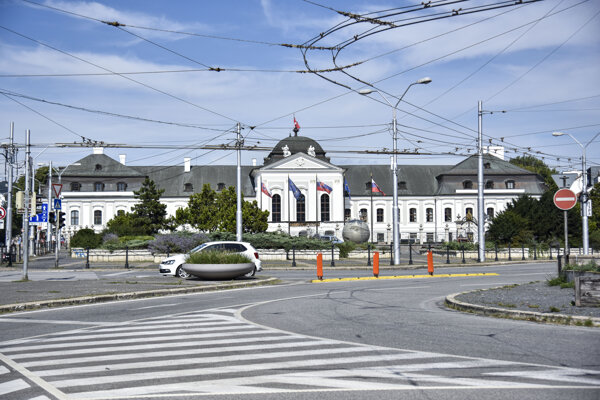 This week, we are writing about travel ideas first. But make sure to continue on to stories on the resurrection of a 1952 painting that disappeared after Stalin’s death and the problems of Slovak artisans.

As well, American John Selecky speaks about his family search in eastern Slovakia in a brand new podcast. Let’s start with some Bratislava news, though.

Bratislava places that will be nameless no more

Many know it as Landerer Park, or more commonly the ‘park on Šafko’ [=Šafárik Square], but the Bratislava green area will change its name to Gábor Baross Park next month.

Born near Považská Bystrica, Baross was a descendant of a Slovak noble family and served as the minister of industry and transport during the existence of the Hungarian kingdom. In addition, he initiated the construction of Starý most (Old Bridge) in the Slovak capital, which is located just a stone’s throw from the park. 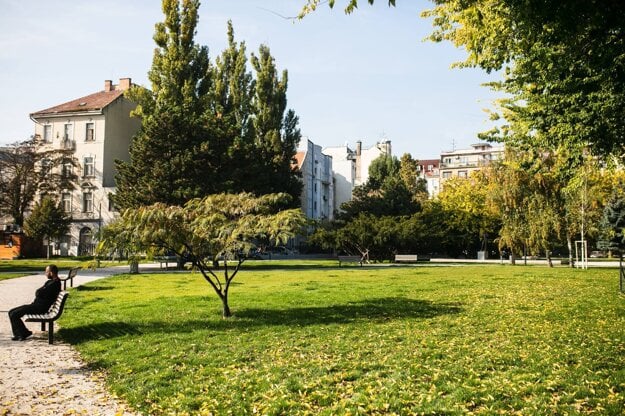 The stairway leading from Židovská ulica (Jewish Street) down to the SNP Bridge will be called the Rabbi Armin Frieder Stairs.

Two nameless underpasses in Bratislava will get names too. The one under the SNP Bridge will be called Podchod pamäti (Underpass of Remembrance). The other under Hodža Square will become Podchod študentov 16. novembra 1989 (Underpass of 16 November 1989 Students), celebrating the students who held an illegal demonstration against the communist regime on the square and walked through the underpass on the eve of the Velvet Revolution.

Other places to visit

Did miners hide opals in an outhouse?

The oldest opal mines in the world, near Prešov, have reopened. Visitors can look forward to new exhibits, including a transportable outhouse used by miners underground. Designated workers had to check if miners did not hide opals in it.

Airstair-like memorial without a plane

On Vápnik hill, just four kilometres away from the town of Levice, stands the nine-metre-high Šiklóš memorial and viewing platform.

Built in 1960 and reconstructed in 2015, the concrete monument refers to the year 1945 when an observatory of the commander of the Second Ukrainian Front, Marshal Malinovsky, who led military operations from this place, was built here.

In addition, the area is one of the largest travertine mounds in Slovakia. However, travertine mining was halted in the past. Many animal fossils and imprints of leaves and plants were found in the former travertine quarry.

Šiklóš is accessible to tourists and cyclists from Levice-Kalinčiakovo and Mýtne Ludany. And what can you see up from the viewing platform? Levice and its castle, nuclear plant, as well as several hills such as Pohronský Inovec and Tribeč.

This monument attracts Jews from around the globe

The Chatam Sófer Memorial is a Jewish burial shrine built over the graves of prominent rabbis and scholars, including Chatam Sófer. It is the sole remaining part of the cemetery destroyed in 1943 during the construction of a Bratislava tramway tunnel.

Outside the Turčianska Štiavnička village, near Martin, a wooden pole surrounded by rocks oversees a meadow. This pole is called the Slavic Idol, which can be found in the Dunín ward area.

It is worth mentioning that equinox celebrations are still held here. In addition, the area offers beautiful views on the ridge of Krivánska and Lúčanská Malá Fatra. Right in Turčianska Štiavnička, tourists can visit the birth house of writer Ján Kostra and a small forest railway exposition. 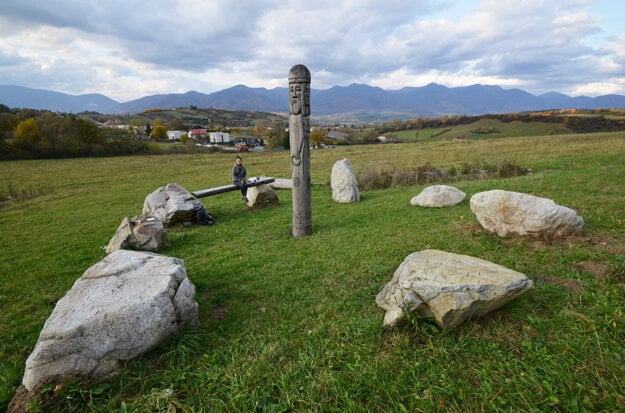 When in the area, head to other interesting places close to the village such as one of the seven wonders of the Turiec region - a system of lakes linked through water channels known as Teplické serpentíny - as well as the castle in Sklabiná and Katova skala (Executioner’s Rock).

The rock is especially recommended to single males who want to save a young girl’s life.

Stalin has gone missing, but he will return

For the past few months, artist Marcel Mališ has been ‘locked up’ in the Slovak National Gallery where he has been working on a monumental replica of the 1952 Thanksgiving of Czech and Slovak People to Generalissimo Stalin painting.

The original social realism work of art was begun by three Czech artists – Jan Čumpelík, Jaromír Schoř, and Alena Čermáková – after Czech politician Milada Horáková was executed by the communists in summer 1950. Due to the numerous persecutions and trials orchestrated by the communists, this period has been always regarded as one of the darkest times of Czechoslovakia. 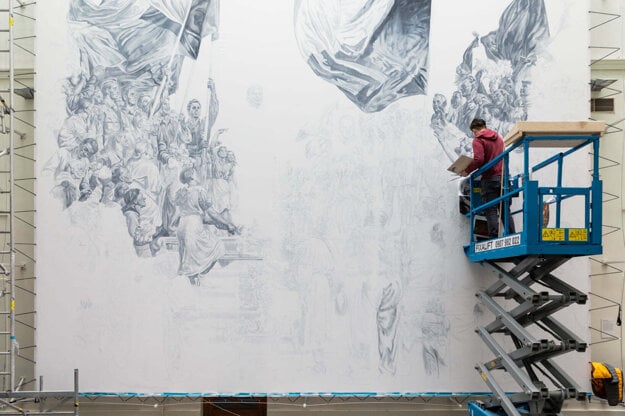 The commissioned propagandistic painting was supposed to represent the servility of Czechoslovakia at a Moscow exhibition, but it was in Prague where the painting drew a lot of media attention during the Czechoslovak-Soviet Friendship in Art exhibition. However, later on, the painting was subject to criticism and when Stalin – a main protagonist in the painting – died in 1953, it disappeared and has never been found.

Mališ has titled his replica, which is hoped to spark discussions about propaganda and fake news, as the ThanksSeeming of the Czechoslovak People. Unlike the original work of art, Mališ will not paint Stalin in his picture. However, he will appear in the painting thanks to digital technology once it is finished. 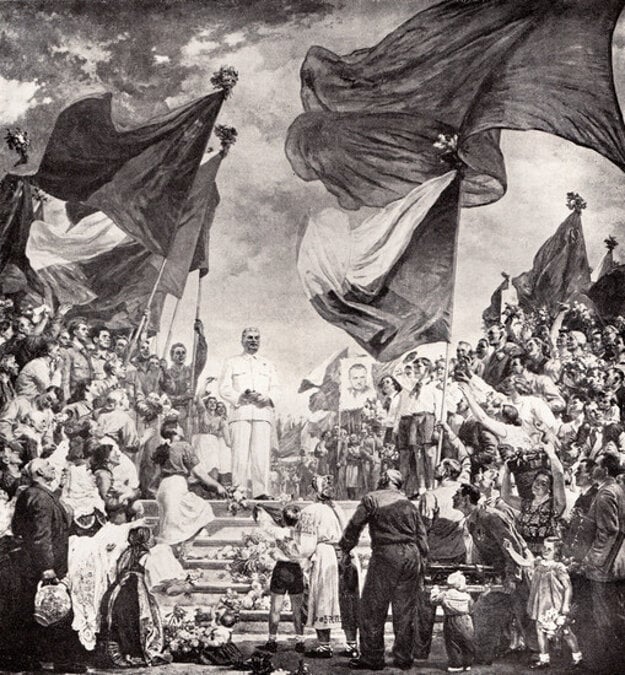 “I want to point out a number of topics. On the one hand, the vulnerability of democratic systems, following the outcome of the [2020] parliamentary elections,” the Slovak artist told the Pravda daily.

The frustration of voters, incompetent people becoming leaders, and the mass control of people through artificial recognition technologies and CCTV are other topics Mališ wants to highlight.

How close to the original work Mališ aims to get is not yet clear but it should be completed on June 27, the day when Horáková was executed.

A pool of culture

Kunsthalle, an art space in Košice, used to serve as a swimming pool in the past, and it was one of the most beautiful buildings in then Czechoslovakia. Architect Ladislav Grečo designed the building. It was built between 1957 and 1962.

Idyllic cafes, bars and patisseries first appeared in Rimavská Sobota, the hub of the Gemer-Malohont region, in the late 19th century.

The Gemer-Malohont Museum has highlighted the importance of the hospitality sector, both now and then, when it selected an old cake box as its exhibit for the month of May.

“In the summer, restaurants and cafes occupied most of the pavement with their tables and chairs. Outdoor seating was fenced with greenery and parasols, and lamps were lit in the evening,” said Éva Kerényi of the Gemer-Malohont Museum in Rimavská Sobota. 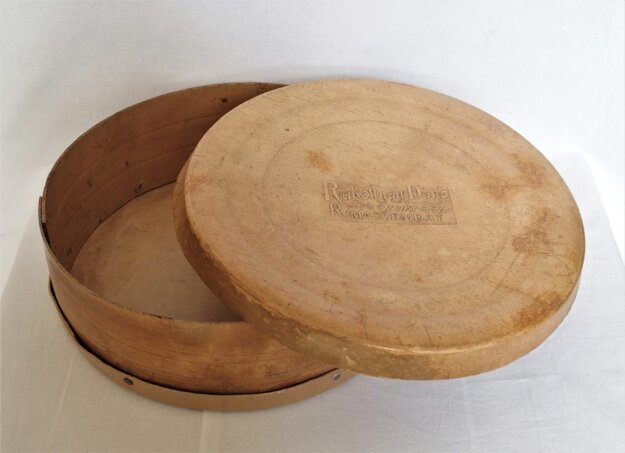 Some of the best known restaurants and cafes during this period were Három Rózsa (Three Roses), later known as Hungária, Gondűző, Zöldfa, Három mókushoz, Huszár, Stolcz, Vadászkürt, Kosiner, Gömör, and Korona. Many of them were located on the Main Square, Elisabeth’s Square, Kossuth Street and Jánošovská Street.

In 1912, there were twenty pubs and restaurants. Patisseries run by Lajos Miskolczy and Danó Rakottyai were then popular among locals. The selected cake box is linked to the latter man.

“The cake box with a diametre of 32 cm was made of light brown cardboard in the Salzer J. Budapest factory,” Kerényi said, noting that the name of Rakottyai’s patisserie is printed on the box. 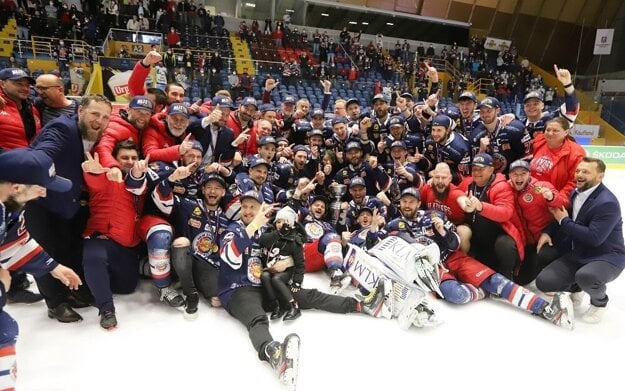 The HKM Zvolen ice hockey team poses for the traditional team shot after defeating HK Poprad and winning the championship trophy in the 2020/2021 season. (Source: TASR)

The pandemic has been a tough challenge for Slovak artisans

Some have already given up and left their art behind to earn a living. The rest is hoping that the situation will improve soon, and they will be allowed to promote themselves at festivals and trade fairs around the country and abroad. Online sales are not great, and many older artisans do not even know that the Internet could somewhat help them.

What it is like to study abroad from home

University students around the world, including from Slovakia, had to switch to online learning soon after the pandemic hit. It took some time to get used to living with Zoom. But what impact has this new way of learning had on Slovak students’ academic performance and mental health?

One of the biggest hits recorded by the Slovak music legend Marika Gombitová, V období dažďa (In the Rain Season), has been remixed by DJ Robert Burian, and the singer is happy with the final result.

“I believe it will cheer you up in these difficult times,” Gombitová, aged 64, said.

The song was originally released in 1987 and appeared on the Ateliér duše (The Soul Studio) album. The re-edition of her songs is, in fact, scheduled to be released later this year. On top of that, Gombitová is planning two concerts next May.

The Stropkov-born artist, who was also a member of the legendary group Modus, has won a number of music awards for her albums and singles throughout her career. Her success was temporarily put on hold in November 1980 when she had a car accident and became paralysed. Despite this setback, the wheelchair-bound artist returned to the stage six months later and continued her career.

After 2000, she decided to gradually cut down on her duties, appearing on stage rarely and recording only a few new songs for films and soap operas.

Interesting bit: Marika Gombitová released the Kam idú ľudia? (Where Do People Go?) album in 1990 and the eponymous song was dedicated to Stevie Wonder, whom she met in early June 1989 in Bratislava.