National emergency continues, but all schools will open next week

The epidemiological situation keeps improving, and only two districts will remain in the dark red tier starting May 17. 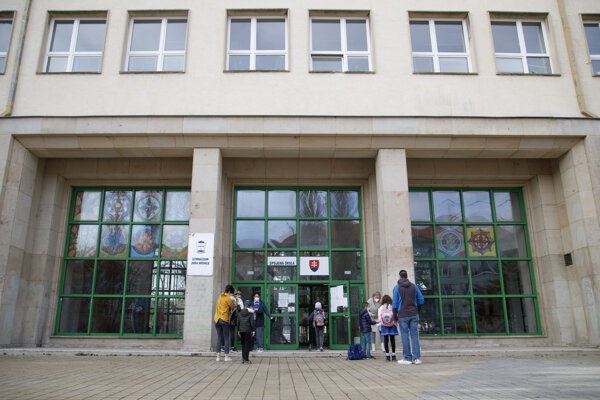 Slovakia will no longer follow the national Covid automat alert system. The districts will only apply the rules for the tier they are currently in, starting next Monday, May 17.

As many as four districts in Slovakia will switch into the orange tier of the Covid automat alert system from May 17. This will be the case for the districts of Hlohovec, Nitra, Senec and Topoľčany.

Another 50 districts will be in the light red tier and 23 in the red tier. Only two districts, Myjava and Sobrance, will remain in the dark red tier, meaning the measures there will be the strictest.

More details about the Covid automat and new measures will be announced on Thursday or Friday.

Despite the differing epidemiological situation in some parts of Slovakia, all schools will reopen across the country next Monday, May 17, Education Minister Branislav Gröhling (SaS) said. Universities will open with limitations only in the four districts that are in the orange tier. 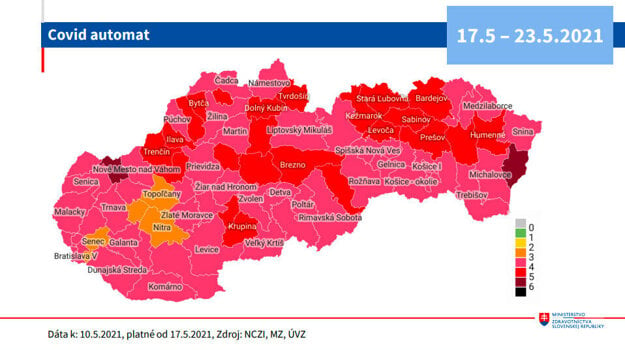 Map of districts from May 10. (Source: Health Ministry)

Law to be adopted this week

Investments Minister and Za Ľudí chair Veronika Remišová said that they waiting for the law on economic mobilisation to be adopted in the parliament and signed by the president. The cabinet agreed at its May 12 session that the parliament should discuss it in a fast-track proceeding.

Under the current rules, several limitations are conditioned with the national emergency only, such as the curfew, the ban on assembly, the work duty for some employees (in this case healthcare staff), the reprofilisation of hospital beds, and the use of state material reserves and emergency supplies, the SITA newswire reported.

The law, submitted by the MPs from four coalition parties, includes some provisions that could be adopted to fight the pandemic that would be conditioned with a state emergency rather than a national emergency.

It should be discussed at the ongoing session, and Remišová expects it will be adopted later this week.

Tiers of districts starting May 17