Check out reading and travel tips for the weekend. 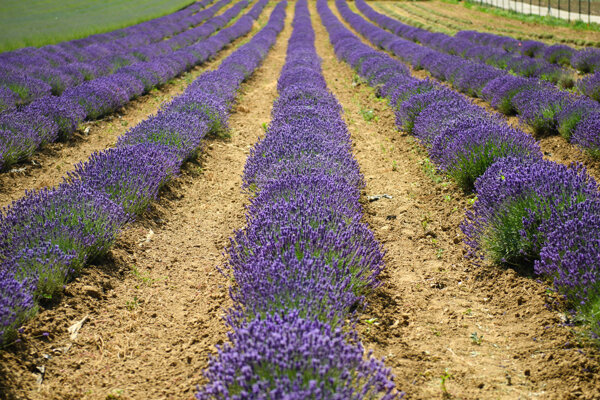 People can visit a farm in Zbehy, near Nitra, this weekend to self-pick lavender. (Source: TASR)
Font size:A-|A+ 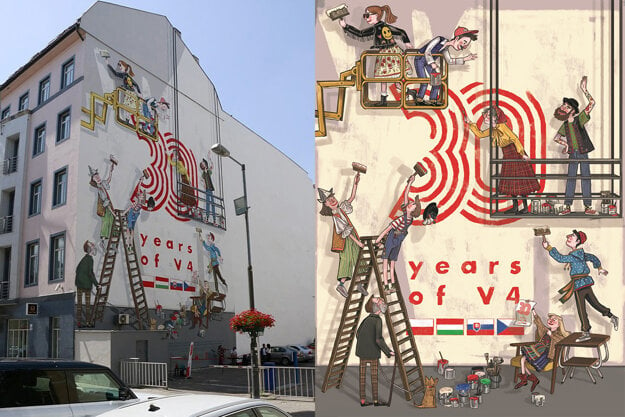 A mural is painted on a building at 3 Gorkého Street in Bratislava on the occasion of the creation of the Visegrad Group 30 years ago and the Polish Presidency, which ended on June 30. The same mural can be found in Prague, Budapest, and Warsaw. (Source: Twitter/V4 Presidency)

While Slovakia boasts of its rich folklore traditions, music in particular, some feel the country falls behind when it comes to keeping Slovak folk music alive across North America.

Until the early nineties, and despite communism, the exchange of folk music between Slovaks living overseas and their homeland flourished. Folk ensembles in North America have been on the decline since. 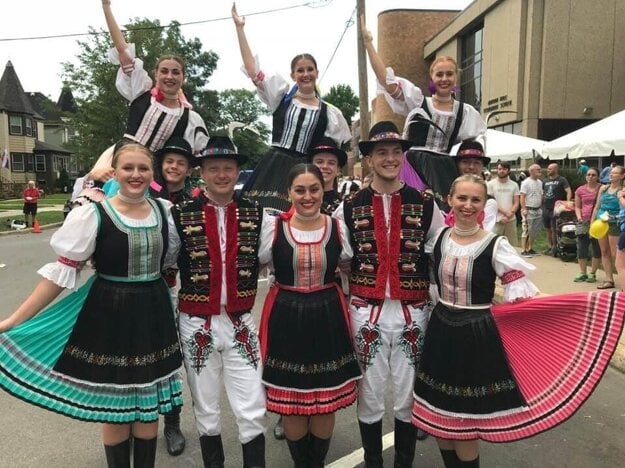 Small Rome on foot or by bike

The city of Trnava, dubbed Small Rome thanks to its many churches, has returned its popular summer walking and cycling tours and even added novelties.

A guide takes visitors to different historical and industrial landmarks that are divided into nine circuits for groups of up to 40 people. Some of the tours are titled the Sacral Monuments of Trnava, Trnava and Kings, Medieval Trnava, Small Rome and Wine, and Technical Monuments.

This summer, the city is running individual tours for couples and families with children for the first time. Moreover, Trnava offers free guaranteed city tours with a guide dressed in historical costume every working day.

“Come at 10:00 to the City Clock Tower on any working day in July and August,” said Alexander Prostinák of the Trnava Tourism organisation. 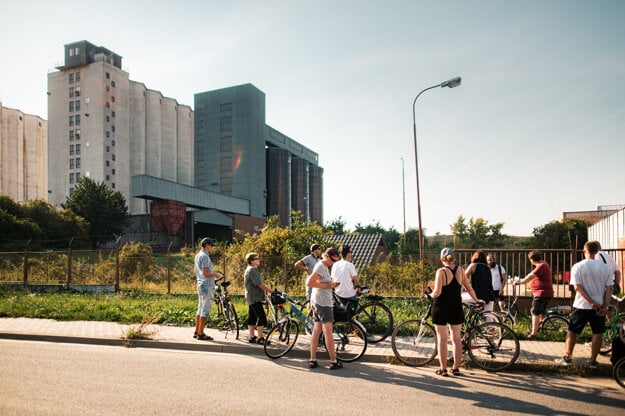 Walking and cycling tours return to the city of Trnava during the summer holiday. (Source: Trnava Tourism)

The city is also offering cycling tours with architect Miroslav Beňák. He will show visitors around various industrial and modern constructions, while guide Slavo Dzvoník will take tourists on a bike trip recounting the history of Trnava as well.

The historical bike tours will be held on July 10 and August 7. General bike tours will run from July 3 to August 14. The maximum number of participants is limited to 30 people, so it is recommended to book a place in advance online, by phone or in person at the local tourist information centre.

Those who do not have a bicycle can rent one, but only five bicycles are available for rent.

Related: The city of Prešov will run the “Holiday Wanderings with a Chronicler” tours, theatrical performances of one actor in a public space, on weekends this summer. 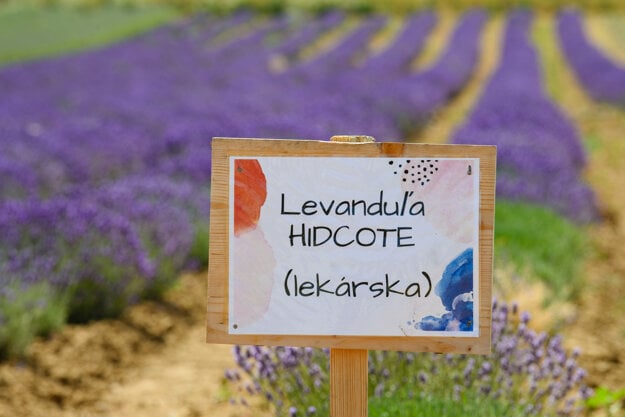 A cave in Demänová celebrates a centenary

The Demänovská Cave of Freedom, which is located in the Liptov region, was discovered a hundred years ago.

On this occasion, the Slovak Museum of Nature Protection and Speleology in Liptovský Mikuláš and the Slovenská pošta postal services provider decided to issue a postage stamp, which was designed by painter Igor Piačka.

It was two enthusiastic cavers who discovered one of the most beautiful caves in Slovakia by digging the sediments of the Demänovka river on August 3, 1921. 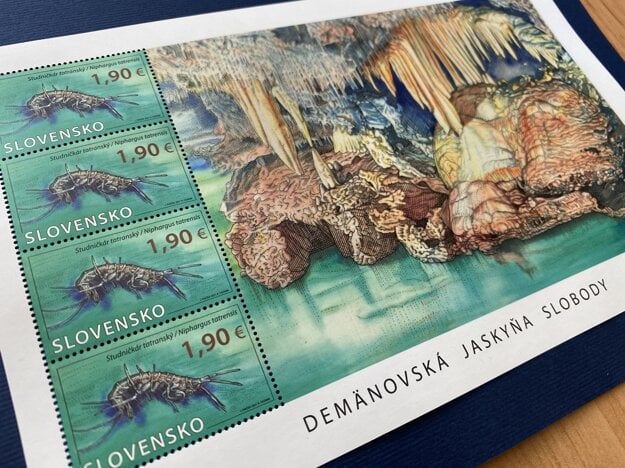 A new stamp marks 100 years since the discovery of Demänovská Cave of Freedom. (Source: Environment Ministry)

The Demänovská Cave of Freedom is a part of the national natural monument Demänovská Cave. This 43-kilometres-long cave system became the longest in the Carpathian Mountains in November 2020 when 250 metres of new corridors and halls in the Demänovská Ice Cave were discovered.

The Cave of Freedom stands out for its beautiful decoration, ranging from massive stalagmites, eccentric aragonite shapes, various forms of lake stalagmites and stalactites to beautiful water lily lakes. The cave's biggest lake is 52 metres long.

The cave is unique for its fauna as well. The bones of cave bear were found here in the past, and a remarkable animal lives in the groundwater - the Niphargus tatrensis, which has become the main motif of the postage stamp.

OTHER DEVELOPMENTS THIS WEEK 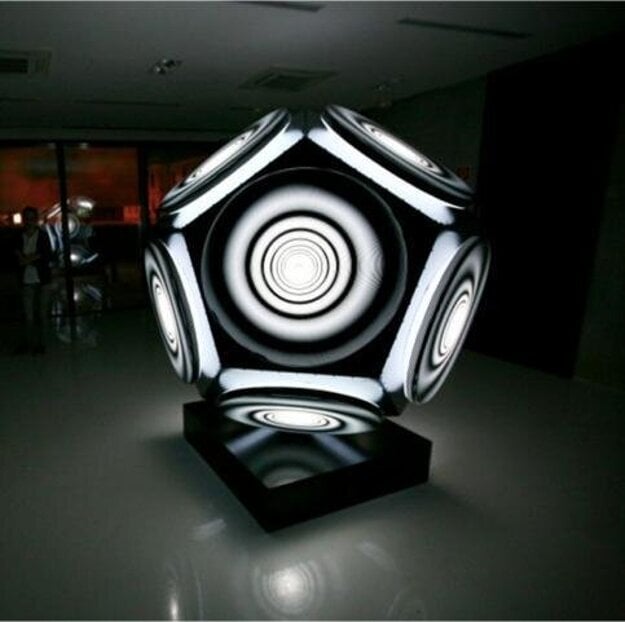 For many Bratislavans, May 8, 1991 was a truly royal day. Princess Diana paid a visit to the Slovak capital for the first and last time, living up to her reputation as the “queen of people’s hearts”.

With the world marking what would have been Princess Diana’s 60th birthday this week, people in Slovakia recall the short visit from 30 years ago, during which the princess made an impact by opening a section for the visually handicapped at Bratislava Municipal Library.

Vividly remembering his meeting with the Princess of Wales, President of the Slovak Blind and Partially Sighted Union, Branislav Mamojka, said: “She grabbed my hand and held it for about 30 minutes as I showed her around the new section.”

The library was not the only place in the city the Princess of Wales visited. Look back at the memorable royal visit.

Weeds on the plate

Common orache, couch grass or burdock. Gardeners fear their occurrence in the well-attended beds of their gardens. For Dodo Dobrík, these plants are a blessing.

The non-cultivated plants, commonly known by the somewhat degrading term of weed, have been enriching his menu for years. He uses them to make teas and sauces or adds them to salads and soups.

Dobrík's determination to share this long-term hobby of his led to occasional courses he holds on these plants and their usage in the kitchen. His aim is to get people acquainted with these plants and, as he says, form a relationship with them.