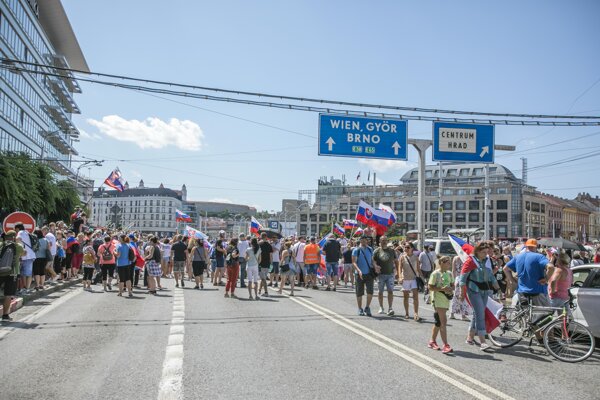 Hundreds of people came to the Presidential Palace on July 29 to protest against vaccination, the government and the president, and the pandemic rules, including the recently adopted law giving benefits to the vaccinated signed by the president earlier this week.

The protest is supported by the far-right ĽSNS led by Marian Kotleba, the Denník N daily reported. 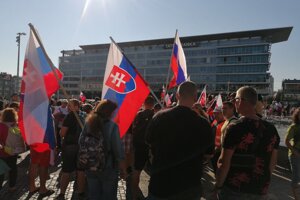 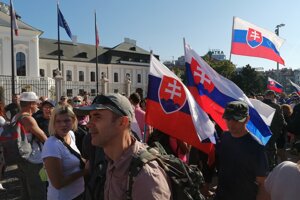 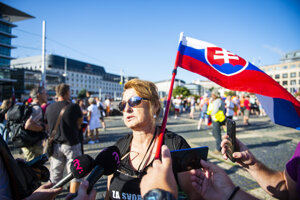 Around noon, the crowd blocked the road and the nearby underpass towards Staromestská Street, paralysing traffic and causing long tailbacks around Hodžovo Square, which is an important traffic hub in downtown Bratislava, as well as SNP Bridge, the TASR newswire reported.

Public transport was blocked as well, and the municipal public transport operator Dopravný Podnik Bratislava even had to suspend the operation of all lines around the area.

The police ask drivers to avoid Hodžovo Square, if possible.

The protests spread to Kollárovo Square in front of the Slovak University of Technology, which was forced to close.

Despite the blockade of several roads, the police intervened only in the evening hours, after 20:00, when they started forcing people out of the roads. The organisers say the protest is over and want to continue demonstration on Friday, as reported by Denník N. 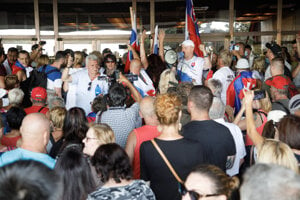 Police officers who were present on the scene told Denník N that they were waiting for further instructions and wanted to avoid any violence.

The situation was monitored mostly by municipal police officers.

The call to attend the protest was shared on Facebook, the Sme daily wrote.

Police see no serious attacks on health or security

The police representatives said at a press conference held on the afternoon of July 29 that they are monitoring the situation.

They explained that it was not possible to prevent the gathering from taking place. Even though it was not officially announced, there is no legal reason to dissolve it, as reported by TASR.

They went on to say that they did not prevent the blockage of roads as it was impossible to limit movement. It was also hard to clearly determine who was a protestor and who was not, they added.

The police are documenting all potential offences, adding that one vehicle has been damaged so far.

“There are no serious attacks on health or security, or a serious breach of public order,” said Police Corps Vice President Róbert Bozalka, as quoted by TASR.

The ruling party OĽaNO said that it realises the current situation has complicated the lives of many people in Bratislava. It sees the main reason behind the protests the irresponsible behaviour of the opposition and called on its representatives to stop pitting people against each other.

PM Eduard Heger (OĽaNO) said that the only way to get rid of the coronavirus is to build herd immunity by vaccination. People should address doctors if they have questions. He also thanked everybody who has gotten vaccinated so far.

State Secretary of the Foreign Affairs Ministry Martin Klus (SaS) said that given the course of the events, the Interior Ministry should provide an explanation of the situation.