The show discriminates against people who watch the broadcast online as well as those with disabilities, critics say. 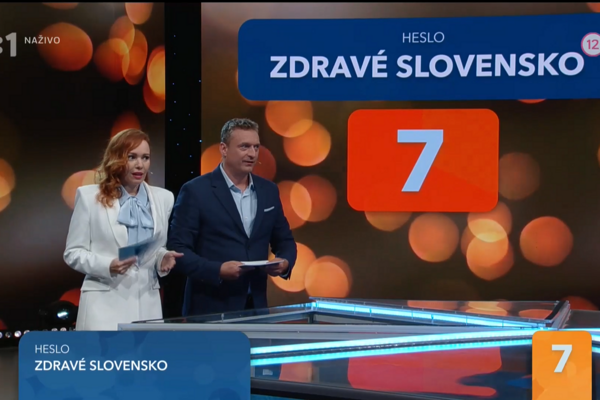 The catchphrase "Healthy Slovakia" was on the screen only for 20 seconds, Zuzana watching it online with lagged broadcast had no chance to said it on time. (Source: RTVS screenshot)
Font size:A-|A+  Comments disabled

The first round of the lottery for the vaccinated aired on the Slovak public-service broadcaster in prime time on the evening of August 15. The first show has exposed flaws and gaps in the rules, though. Finance Minister Igor Matovič called it a drama and then travelled to eastern Slovakia to personally meet the woman who did not won due to technical difficulties.

The lottery with prizes for the vaccinated was designed as a tool to increase interest in vaccinations, which has been falling in Slovakia over the summer. Anyone who has received both doses of a Covid vaccine in Slovakia is eligible to apply. Vaccination alone, however, does not suffice to win a prize. Registration is required, after which the vaccinated and registered viewers need to watch the Sunday evening broadcast on the RTVS public-service television, pick up the phone if they are drawn, and say the right catchphrase.

Five people were drawn in the live broadcast on August 15. For being drawn, they automatically won €1,000, but they could win a main price of €100,000. It was necessary to fulfill two conditions – to pick up the phone in 20 seconds and say the watchword in another 20 seconds, which was shown on the screens in those 20 seconds. The prizes that the participants failed to win accumulated, and the last person to be called then played for €400,000.