Gatherings were held to protest against the government and vaccination. 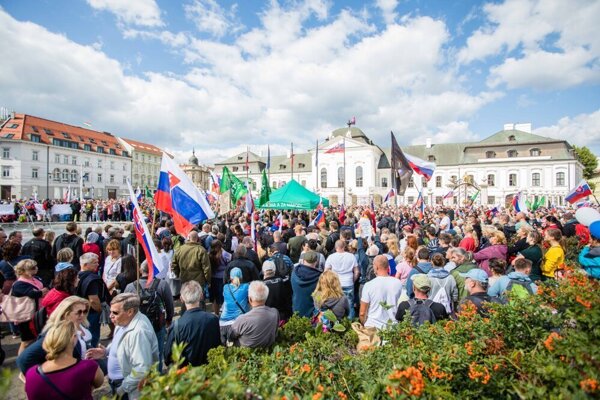 Hundreds of protesters gathered in front of the parliament building in Bratislava on Wednesday afternoon.

Shortly after 16:00, a group of protesters blocked the road near Hodžovo námestie and Suché mýto, right by the Presidential Palace. The protesters then moved on towards the SNP Bridge. Around 17:00, traffic was blocked on the SNP Bridge and along Staromestská Street, and later at the Štefánikova Street, all the way up to the main train station.

The police only managed to push the protestors off the road after 19:00. The Bratislava Regional Police reported to have detained 12 people during the protests, due to offences like disturbing public order, blocking the traffic or disobeying the calls of a public official. The health service reported to have treated three injured persons.

Participants are protesting against the government and vaccination. It is one of several protests taking place in the capital and in the eastern-Slovak city of Košice on Constitution Day, which is a national holiday in Slovakia.

In Košice, separate protests have been organised by opposition Smer and by the renegades of the far-right ĽSNS, now members of the Republika party.

The Bratislava gathering, which includes some far-right ĽSNS members and sympathisers, started in front of the Presidential Palace and after several speeches moved towards Castle Hill, where the parliament is located. Dozens of police in full anti-demonstration gear have been deployed to prevent the crowd from coming near the parliament, the TASR newswire reported. The anti-conflict team of the police and the municipal police intervention team are on the scene as well.

The gathering was peaceful for the most part. There was an isolated incident when a few protestors clashed with a driver who was passing by. The protest caused some limitations in public transport.

Meanwhile, in front of the parliament, the police intervened against several protesters shortly after 13:00, in order to keep them at least 50 metres from the parliament. Two protestors have been detained and escorted to the police station.

The crowd is protesting against the government, claiming that there is an ongoing "genocide of the Slovak nation" and that the Constitution and fundamental human rights are being violated, TASR reported.