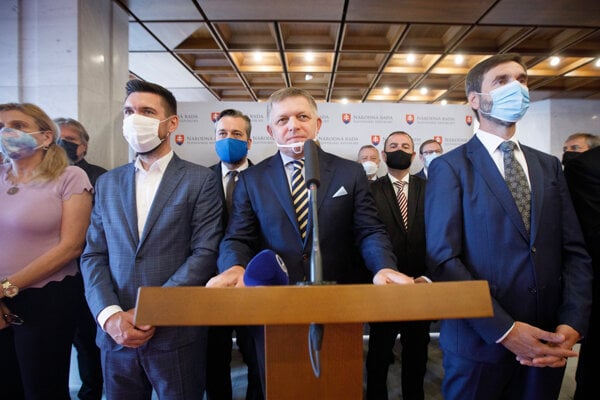 The representatives of the Smer party. (Source: SITA)
Font size:A-|A+29

If the parliamentary election had been held in September, it would have been won by the non-parliamentary party Hlas led by ex-PM Peter Pellegrini with 18.8 percent of the vote.

The junior coalition party Freedom and Solidarity (SaS) would finish second with 14.5 percent, followed by the opposition party Smer led by another ex-PM, Robert Fico, with 13.9 percent.

Fico’s party keeps rising in the polls. Compared with the previous AKO survey, its support grew by 2.6 percentage points. On the other hand, voters' support for Hlas and SaS has dropped.

The last party to pass the threshold would be Republika, formed by the renegades of the far-right Kotlebovci – People’s Party Our Slovakia (ĽSNS). It would have won 5.2 percent of the vote.