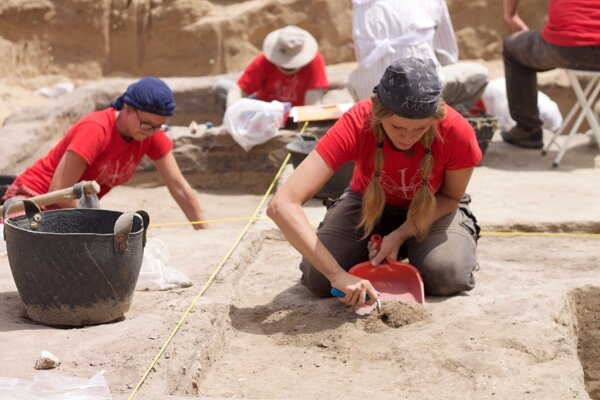 During the excavation of the now-famous northwest corner of Rameses III’s fortress from the first half of the 12th century BCE, archaeologists unexpectedly came across two more fortress walls covering each other. This discovery substantially changed the understanding of the fortress.

Egyptologists from the Department of Oriental Studies at the Slovak Academy of Sciences (SAV), along with specialists subsidised by the Gedid Aigyptos Foundation, contributed to this discovery during their stay at a research session at the Tell el-Retaba archaeological site on September 11 2021, the TASR newswire reported.

“Until now, we had believed that the north part of the site was made of only one wall during the reign of Rameses III,” Jozef Hudec of the Oriental Studies department at SAV told TASR. “At the time, it would have sufficed for the defence of the fortress from that angle, as on that side the fortress was also defended by a lake or wetland. However, we discovered another two walls. One of them was five metres thick, and the other was further elevated and newer – it had a width of nine metres.”

He added that the two newly discovered walls are in a severe state of disrepair, owing to the earthworks by the current owner of the neighbouring marketplace.

Inside the fortress, the archaeologists discovered a massive structure made of unfired bricks, preserved by the outside wall to a height of half a metre. The purpose of the structure remains unknown. Two column bases were discovered inside another unearthed building. Excavation revealed various bowls, a fish skeleton, beads and amphora from the Third Intermediate Period of Egypt (11th to 7th centuries BCE).

Various hypotheses have emerged from the dating and interpretation of the fortress walls.

“One hypothesis that we are considering is that the bottom masonry wasn’t a fortress wall,” Hudec said, as quoted by TASR. “It could have been a retaining or foundation wall for the wall situated above it, judging by its stabilisation in the muddy or wet bank of water that was nearby in ancient times. A further research session will be able to answer more questions related to this or other fortifications in Tell el-Retaba.”

The Tell el-Retaba archaeological dig site is in the ancient Nile valley, called Wadi Tumilat, between the modern cities of Zagazig and Ismalia. The September research session revealed that Tell-elRetabi was not just a fort, but also a trade and manufacturing centre. This was demonstrated by the discovery of ceramics from Greece and the Eastern Mediterranean, and thick fired layers unearthed from between the nine-metre fortress wall and massive structure.