McDonald's instead of an old milk bar. Photographer shows how some places have not changed at all

Some places in Slovakia continue serving the same purpose they had before 1989. 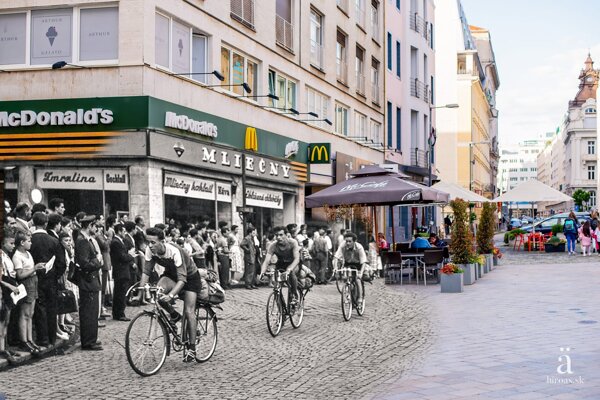 Passing down the streets in one’s home and taking the same road every day to go to work, one hardly ever stops to think how the places they see every day looked in the past.

Photographer Kristián Majzlan is an exception. Together with his colleague Michal Pavlov of the Hiroäs marketing agency, they created a project where the present and the past are espoused in each individual photograph.

The historical photos of towns have fascinated Majzlan since his teenage years. He liked taking photos of the places where he lived. But when he would show the pictures to his friends, they would show little enthusiasm, knowing close to nothing about the places.

“I had nobody to share my passion with until I came up with the idea of The History is Present project,” Majzlan said in an interview with The Slovak Spectator.

It was a year ago that Majzlan started wandering the streets of Bratislava's Old Town and gradually added more places around Slovakia. Since then, his project has gained popularity. The work has been on display in several towns, most recently in Martin.

His idea is the child of the November 2020 lockdown, when people could do little more than remain at home or go out for a walk. Majzlan, a native from the central-Slovak city of Prievidza, walked the streets of the Old Town in his new home of Bratislava, getting to know some of the places better. 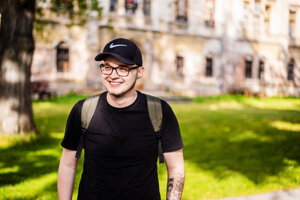 First he photographed the city and then thought about merging the historical photos of sites with the images he captured in 2020, to show how much it had changed.

“Frankly, it was a project just for myself. I had no idea if anyone else would enjoy viewing such photos,“ Majzlan explained.