Those denouncing the defence cooperation agreement brought their wild antics inside parliament. 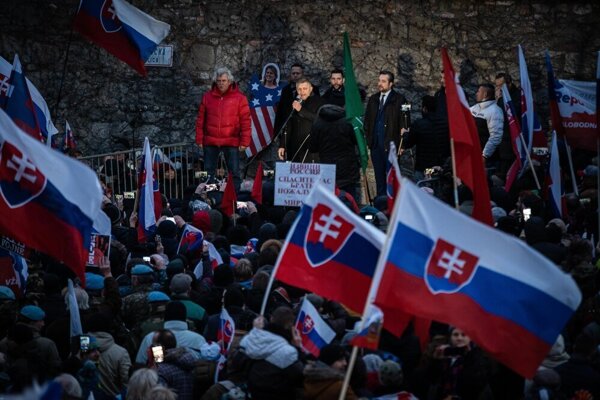 Welcome to your weekly commentary and overview of news from Slovakia. The DCA passes, and threats follow. No more measures after Omicron? Elite police officers still facing charges. Slovakia is less religious, census shows. A noted diplomat passed away.

The parliamentary vote on the defence deal with the US was always going to be an ugly affair. That much had been clear in the weeks running up to the vote, once the entire opposition had jumped on the propaganda bandwagon to oppose it.

But what eventually occurred in the Slovak parliament last week exceeded even the worst expectations and left even seasoned observers of Slovakia’s sometimes idiosyncratic politics shaking their heads in disbelief. It is not as though, in the past, parliament hasn’t sometimes resembled an amateur dramatics performance, or perhaps or an after-school detention class – and it is worth noting that the leader of the largest coalition party, Igor Matovič, has frequently been at the centre of such happenings.

But this time around, it was exactly what it looked like: a lowbrow variety show directed by a former IT teacher who is (still) the face of the far right in Slovakia. This improbable impresario, Marian Kotleba, is currently waiting for the Supreme Court to decide his appeal against a conviction and prison sentence on extremism charges, handed down last year. As Defence Minister Jaroslav Naď tried to deliver an address to MPs ahead of the vote, Kotleba’s ĽSNS MPs yelled and blew whistles, and blocked the speaker’s desk. Kotleba himself leaned over Naď and tried to grab his script. When two SaS MPs unfurled a Ukrainian flag in front of the speaker’s desk in solidarity with Ukraine, an ĽSNS MP threw water over them and over the Ukrainian flag, which they then snatched away – an act for which Slovak diplomats have formally apologised to Ukraine.