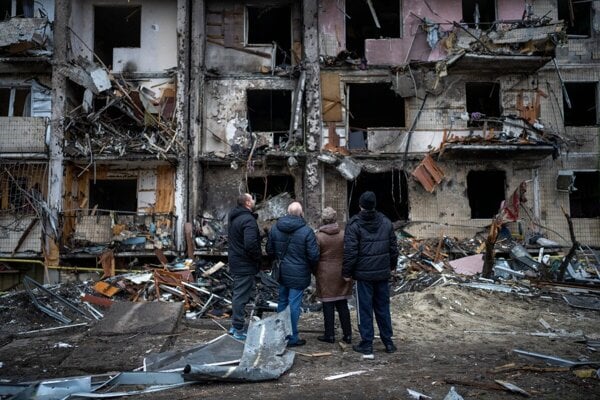 People in Kyiv standing in front of a block of flats destroyed in an air strike. (Source: AP/SITA)
Font size:A-|A+  Comments disabled

Despite nearly everyone’s belief that it should not, could not, would not happen, a European country has been invaded by its authoritarian neighbour. Where does this leave Ukraine – and Slovakia?

Despite heroic resistance, Ukraine is being overrun. Let us not be under any illusions about what this means.

Innocent Ukrainian soldiers and civilians will be killed in their hundreds, possibly thousands, by Russian forces in the coming hours and days. That is simply the cold logic of war. With President Putin’s decision to invade, their fate was sealed.

We have evidence of what is to come