Humenné diary: Many have asked us to take them back to Ukraine

Jana Koprivňáková spent last week volunteering at a camp in eastern Slovakia for people fleeing the war in Ukraine. These are her thoughts and impressions. 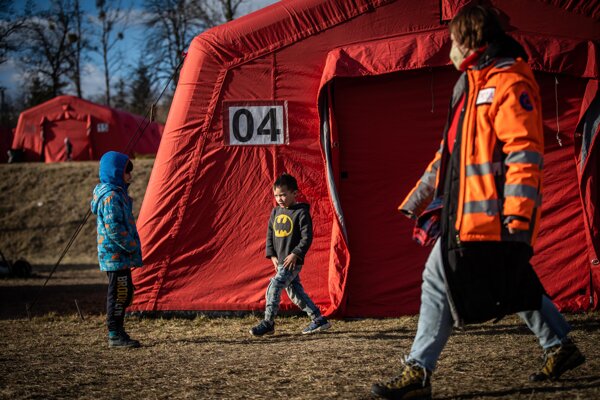 Jana Koprivňáková spent last week volunteering at a camp in eastern Slovakia that is providing temporary accommodation for people fleeing the war in Ukraine. Every day she wrote to her colleagues back in Bratislava. These are her thoughts and impressions.

I'm sending you some snapshots from today - the boys had a football match, with medals made from cookies. Matúško is our youngest, at four months – and no, he was not playing football :-)

I have to process my emotions, so just some brief info today.

I am in Humenné (08:00-18:00) in a tent camp. It’s at an Interior Ministry training complex under the command of the Fire and Rescue Corps.

The first tents were erected on February 25, the day after the invasion. The first refugees were welcomed that day.

One of the firefighter units is from Malacky! The commander, Sergej Savin, tells me they have some special training for this work, unique in Europe. 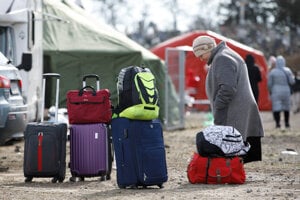 People change here depending on whether they just need to spend the night, replenish supplies, just take a shower and move on, or stop a little and think about what to do next – and this is where hopelessness can creep up very quickly, because most people end up here because they don’t have anyone anywhere, and have nothing in their pocket ... also, they thought they would have to withdraw all their money while they were still in Ukraine, so families come here with hryvnia and do not know what to do next. [Ed. note: Slovak banks have now begun exchanging hryvnia notes for euros.] The longer they stay in the camp, the more nervous they grow. People who were ignored by mainstream society even before the war are ending up in the camp.

Unfortunately, even among these ones, there are even less fortunate people – mostly seniors. Nobody wants them! Nobody is waiting for them and they have nothing – one has only 3 hryvnia [approximately €0.10] ... Their pension went to their post office, their only phone was a landline … neglected, frightened, hurt, grateful. I did not take photos, they cried. They need a phone – it's the only communication channel with the authorities. One gentleman, Ivan, is 61 – so he is not a pensioner yet, but at the same time he is difficult to employ. What will happen to him?